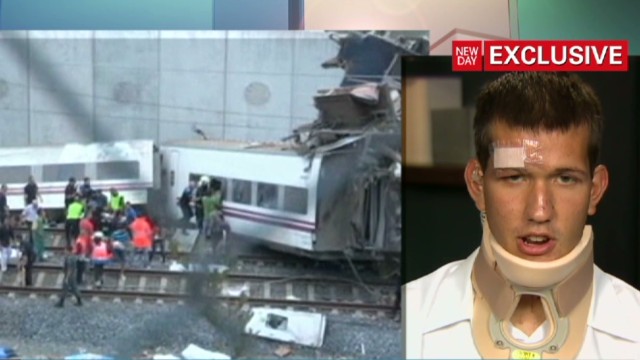 Spain train crash survivor: thought speed “might have been an error”

“My condition is improving quickly, and I have nothing that is going to be permanent or is going to not heal on its own,” Ward said.

“I was writing in my journal, I kind of looked up and saw the speed and thought ‘oh that’s funny,’ I thought it might have been an error or something,” Ward said. “We went around a sharp turn and all of the sudden you can tell one set of wheels left the rails…. No one got super scared about it…. And after one or two seconds you could feel us leave the other set of tracks and the whole train rotated about 90 degrees. I blacked out before we hit the ground, which was very lucky for me, and the next thing I knew they were helping me out.”

When CNN’s Chris Cuomo asked Ward what he saw when he came out of the blackout, Ward responded, “The train had fallen into a ditch where I was and they helped me up and off to the side…. I was one of the first people they helped out. They were helping other people out. There was screaming, there were bodies, there was smoke.”