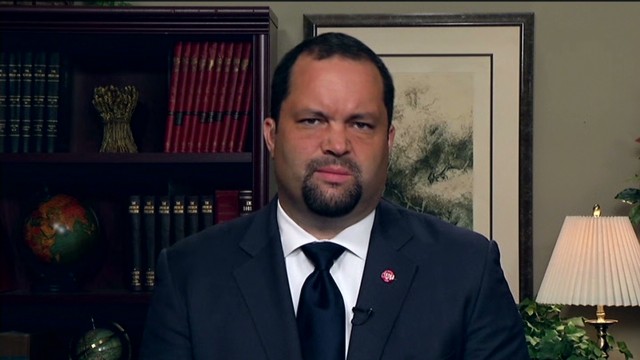 NAACP’s Ben Jealous to Candy Crowley: “our young people have to fear the bad guys and the good guys”

In an interview today on CNN’s State of the Union, NAACP president and CEO Ben Jealous reacted to the verdict in the George Zimmerman trial. A transcript of his remarks are after the jump.

CROWLEY: NAACP president and CEO, Ben Jealous, says the civil rights group
is outraged and heart broken by the Zimmerman verdict. He is joining us
now from Orlando. Good morning and thank you for joining us.

CROWLEY: Ben, I want to ask you, you do want to pursue a civil rights
federal case against Zimmerman. Have you talked to Eric Holder, the
attorney general about that?

JEALOUS: We have talked to senior people on his team. And we are glad that
what they began months, you know, months back continues which is a serious
reviewing of everything that came out in this case, everything that was
known before this case if this moves into a civil phase, they will review
all that comes out in that and then they will make a choice about whether
or not they will pursue criminal civil rights charges.

We are calling on them to do just that, because when you look at his
comments and when you look at comments made by young Black men who lived
in that neighborhood about how they felt, especially targeted by him,
there is reason to be concerned that race was a factor in why he targeted
young Trayvon.

CROWLEY: There were various reports early on after this case became
public. The FBI did go down and talk to some of George Zimmerman’s
employer, his fellow workers, ex-fiancees, et cetera, et cetera, and they
all said to a person at least in, so far, as these reports came out, that
they didn’t see any sign of any kind of bias.

They noted a couple of things that he has mentored some African- American
children that there is not bias there. What specifically makes you believe
that this is a civil rights case? JEALOUS: You know, there were comments
made — I don’t think we want to retry it here, but the reality is that
his comments are these punks always get away. Comments by young Black boys
in that neighborhood felt like he kind of zeros them out give people
concern. And the reality is that even if there had been several burglaries
in his neighborhood and he believed that the suspects were never caught
were young Black men, there is no reason for him to kill Trayvon.

And so, it’s important, just as we all put our faith in this justice
system here in Florida and in the jury that we let the justice system run
its course. And the reality is in these types of cases where there are
very serious questions, we know there will be a state phase. There will be
a civil phase almost assuredly and then there will be a federal civil
rights phase.

JEALOUS: And we are putting our faith in that system.

CROWLEY: You said you that you were outraged by this verdict. Who are you
— who’s the focus of that outrage? Are you upset with the jury? Are you
upset with the prosecutors? What went wrong?

JEALOUS: We’re upset with a situation in this country where as Black
people, as Black parents, parents raising Black boys, Black girls in
society, that it feels so off that our young people have to fear the bad
guys and the good guys. The robbers and the cops and the self-appointed
community watch volunteer who thinks that they’re keeping folks safer.

And we want to finally live in that country that our kids say our country
is every day when they say the pledge, and they say this is one nation
under God with liberty and justice for all, we yearn to be in that place.

CROWLEY: Right. And I want to play you something that Benjamin Crump said
yesterday. He, of course, has been the Martin family attorney for some
time now. And here’s something he said yesterday.

BENJAMIN CRUMP, MARTIN FAMILY ATTORNEY: Trayvon Martin will forever remain
in the annals of history next to Medgar Evers and Emmett Till, as symbols
for the fight for equal justice for all.

CROWLEY: Medgar Evers and Emmett Till, of course, just became icon cases
in the civil rights movement. Do you consider this of that caliber?

JEALOUS: There is no question that this case has pulled together the
current generation of young people of all colors in the way that the Teal
case did and the way that the Rodney King case did. This case stands out
and we should ask ourselves why it does stand out to young people. Why
there are so many young people who identify with the experience of having
your color or your friends color or their style of dress or their hoodie
confused with grounds for suspicion.

And we should listen for our young people and search with them when they
ask how is it that young Trayvon Martin could be killed by George
Zimmerman and George Zimmerman gets no time when Michael Vick got two and
a half ears for killing dogs when a domestic violence victim in Northern
Florida shot warning shots in the air over the head of her attacker and
got 20 years.

JEALOUS: And it’s important that we take the feelings of our young people
very seriously, and we help them sort through this.

CROWLEY: Just quickly, I want to ask you, Robert Zimmerman’s brother was
on CNN last night, and he expressed fear for his brother’s life. As you
know, there have been some threats on the internet, et cetera. Your
message to those people who might threaten or might actually do harm.

JEALOUS: We are very pleased that last night we saw no violence in this
country that was related to this case. We are very proud of the discipline
that this generation of young people have shown. I’m sad to say that my
own generation didn’t show such discipline when we were outraged and
heartbroken at the verdict in the Rodney King case.

And it is — I think we should, frankly, right now, be celebrating the
fact that we’ve seen a generation of young people respond by using our
system. Raising their voices, yes but not using their fists.

CROWLEY: They have, indeed, raised their voices peacefully. All of those
who are out protesting Black and White, the verdict those who feel it was
an injustice. Ben Jealous, president and CEO of the NAACP, thank you for
your time.