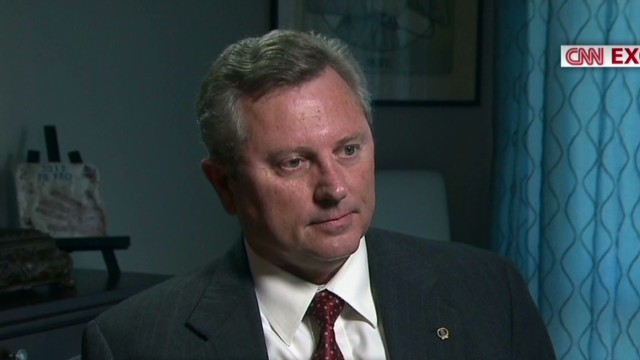 George Howell (@georgehowellCNN) sat down for a CNN exclusive interview with former Sanford police chief Bill Lee, who was forced to step down in the wake of the death of Trayvon Martin and the Sanford police department’s investigation of George  Zimmerman.  Lee tells CNN that he has not wavered from his initial stance of standing by his officers’ investigation.

Yes, so Bill Lee tells me that he’s been watching this trial throughout.  You’ll remember that he himself had to testify in court.

And he says when you look at what his then officers said on the stand, it came out in court, he believes, that they did their job to the letter.  And though unpopular at the time, he believes that he upheld his oath, but he lost his job.

HOWELL (voice-over):  There were protests and heated rallies.

HOWELL:  Anger echoed throughout the nation because the man who shot and killed 17-year-old Trayvon Martin, George Zimmerman, wasn’t immediately behind bars.

The criticism built.  The pressure increased to make an arrest.  And it all came down to this man, former Sanford Police Chief Bill Lee.

(on camera):  When you look back at what happened, was there a lot of pressure on you to make an arrest?

BILL LEE, FORMER SANFORD, FLORIDA POLICE CHIEF:  There was, um, pressure applied.  You know, I — I’m — the, you know, city manager asked several times during the process well, can an arrest be made now?

And I think that was just from not understanding the process, the criminal justice process.  And one of the city commissioners come to me on two different occasions and say, you know, all they want is an arrest.

And I explained to them, well, you — you just can’t do that, you know.  You have to have probable cause to arrest somebody.

And the — and it was related to me that they just wanted an arrest, they didn’t care if it got dismissed later.

And you don’t do that.

HOWELL (voice-over):  On the night of the shooting, February 26, 2012, police took Zimmerman into custody for questioning, but later let him go.

Why is it that, you know, for 40 plus days, George Zimmerman walked a free man?

LEE:  The laws of the state of Florida and “The Constitution” require you to have probable cause to arrest someone.  The evidence and the testimony that we had didn’t get us to probable cause.

HOWELL (voice-over):  Police passed the case on to the state attorney’s office.  The governor then assigned the case to Special Prosecutor Angela Corey, who charged Zimmerman with second degree murder.

But it was too late for Bill Lee, pushed aside after only 10 months on the job, then fired.

(on camera):  There was political pressure on one hand, would you agree?

HOWELL:  There were outside influences on the other?

HOWELL:  Did you get a fair shake?

LEE:  I don’t think so.  I upheld my oath.  You know, I upheld, you know, my oath to abide by the laws of the state of Florida and “The Constitution” and I — I’m happy that at the end of the day I can walk away with my integrity.  I’m at peace with it on most days.  I’m a man of faith and, uh, but I — it stings.

HOWELL:  Lee also talked to me about that 911 audiotape and the non-emergency tapes that were played for Trayvon Martin’s family at city hall without law enforcement present.  He said that he advised city officials not to play those tapes, that they should have been played individually for each family member, and certainly with a law enforcement officer present to see it — Wolf.