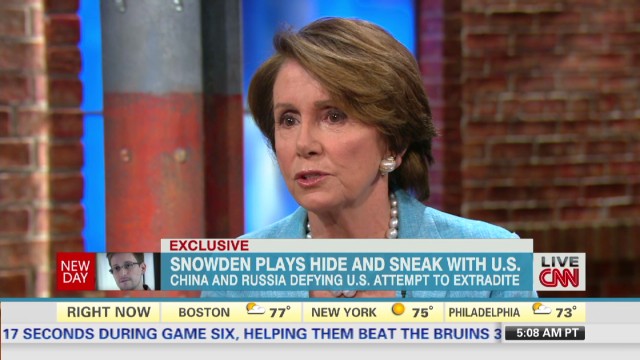 Pelosi to Bolduan: There will be an immigration bill; Snowden is not a hero

This morning on New Day, House Minority Leader Nancy Pelosi told CNN’s Kate Bolduan that the Senate and House will have an immigration bill and Republicans need to prioritize it if they want to be relevant with the Hispanic community in future elections. When asked about Edward Snowden, she said he is not a hero since he broke the law. She said the current administration has created extra protections for American liberties after the Bush administration by making information requests go through a FISA court with oversight by Congress.

On the immigration bill, Rep. Pelosi said, “Democrats and Republicans have been working together in the House of Representatives for a number of years on legislation that bears some similarity to what’s going on in the Senate…. I think it’s important for the House to have its own bill, but I think there will be a lot of public pressure if we don’t to take up the Senate bill. I hope we could have a bill and go to conference and reconcile the differences between the two bills, but we will have a bill.”

On Snowden and privacy, Rep. Pelosi said, “I mean, the point being is that we have a balance between liberty and security, and this president has been doing that. So, this reaction by some that, oh, [Snowden’s] a hero because he revealed this or that — that’s not a hero. He has broken the law. And I think we have to look into the fact that… there’s so many people working in the intelligence community, patriotic Americans, who take their oath of office seriously to protect and defend the American people.”