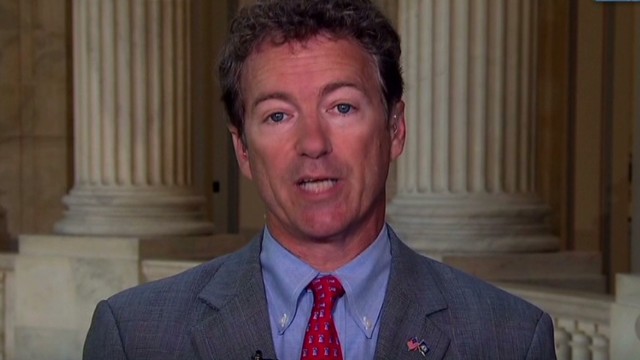 Sen. Rand Paul on DNI Clapper: “He would not work in my administration”

In an interview today on The Situation Room with Wolf Blitzer, Sen. Rand Paul discussed the use of surveillance programs and reacted to NSA hearings today. Jim Acosta guest anchored today’s 5pm hour. A full transcript of the interview is after the jump.

SEN. RAND PAUL:  What I’m saying is that the director of National Intelligence, in March, did directly lie to Congress, which is against the law.  He said that they were not collecting any data on American citizens and it…

… JIM ACOSTA:  If you were president, would you ask for his resignation?

SEN. RAND PAUL:  Yes.  He would not work in my administration, because the thing is is that we have to be able to trust our officials.  And when you’re doing this and when you have the ability to completely destroy people’s lives, you have the ability to actually kill people overseas, I would think that you really have to have the utmost trust.  And I think he’s lost our trust by lying to us.

FULL TRANSCRIPT
THIS IS A RUSH FDCH TRANSCRIPT. IT MAY NOT BE IN ITS FINAL FORM AND MAY BE UPDATED.

JIM ACOSTA, HOST:   And joining us now is the Republican senator from Kentucky, Rand Paul.

Senator Paul, thanks very much for joining us.

Let’s get right to it.

Earlier today, as you know, at this hearing, uh, the head of the NSA, General Keith Alexander, uh, said that the surveillance programs stopped a number of attacks over the last several years.  He even detailed some of those attacks.

Lake — let’s take a listen to what he had to say and then get your reaction.

GEN. KEITH ALEXANDER, NSA DIRECTOR:  In recent years, the information gathered from these programs provided the U.S. government with critical leads to help prevent over 50 potential terrorist events in more than 20 countries around the world.

ACOSTA:  And Senator Paul, uh, General Alexander, the other officials at this hearing, they said that the surveillance programs stopped a — an attack on the New York subway system, on the New York Stock Exchange and others.

Uh, do you buy what the general and the other officials were saying?

SEN. RAND PAUL (R), KENTUCKY:  Well, frankly, they told us four months ago they weren’t collecting any data on American citizens, which was an outright lie.  So I think they’re at a bit of a credibility gap at this point.
the other question I have — and I’ve listened to them both in public and in private hearings, I haven’t heard of a single case that couldn’t have been captured or investigated with a traditional judicial warrant and looking at the phone calls of a suspect.

My understanding is they like looking at all Americans’ phone records because they think it’s easier and faster.  That’s what I heard from them, easier and faster, but not that they couldn’t have done this with a regular traditional judicial warrant.

ACOSTA:  And Senator, I just want to make sure I wasn’t, uh, misunderstanding you.  Uh, you just said that, uh, the head of the NSA was, uh, guilty of an outright lie.

Are you saying that, uh, the General and these other officials are — are liars?

PAUL:  What I’m saying is that the director of National Intelligence, in March, did directly lie to Congress, which is against the law.  He said that they were not collecting any data on American citizens and it…

PAUL:  — and it turns out they’re collecting billions of data on phone calls every day.  So it was a lie.  What I’m saying is that by lying to Congress, which is against the law, he severely damaged the credibility of the entire intelligence committee.  Now — community.

ACOSTA:  What should be done about that?

I mean it — you — I mean I know that — that Mr. Clapper went on another network and said that, uh, his response — and I know what you’re talking about, you’re talking about Senator Ron Wyden’s question about data collection on millions of Americans.  That’s when Mr. Clapper gave that response.  He went on the Andrea Mitchell program and said it was the least untruthful answer he could give.

I’m — I’m guessing here that you’re saying that that’s not satisfactory for you.

ACOSTA:  Should the president ask for his resignation?

PAUL:  I can’t imagine how he can regain his credibility.  When you lie, when you, frankly, come in front of the Senate and a senator asks you a direct question, which, by the way, he was warned of, according to Senator Wyden’s office, they called the director of National Intelligence and said, we are going to ask you this question.

So even though he was told in advance he would get the question, he still lied in a public hearing.

I think there needs to be an open debate and Americans need to decide, are you willing to give up the data on all of your phone calls every day, all the time, because of your fear for terrorism, or, do you think, like I do, that you can catch terrorists and have the Bill of Rights at the same time?

I frankly think you can have both.

ACOSTA:  So should Mr. Clapper resign, do you think?

PAUL:  Well, you know, the president has to decide that.  I don’t get a choice to decide.  Mr. Clapper…

ACOSTA:  If you were president, would you ask for his resignation?

PAUL:  Yes.  He would not work in my administration, because the thing is is that we have to be able to trust our officials.  And when you’re doing this and when you have the ability to completely destroy people’s lives, you have the ability to actually kill people overseas, I would think that you really have to have the utmost trust.  And I think he’s lost our trust by lying to us.

ACOSTA:  You know, your words on this issue have been taken to task.  Uh, Dick Cheney was on one of the Sunday talk shows over the weekend.  Uh, he said you were wrong about all of this.

Let’s listen to what he had to say.

DICK CHENEY, FORMER VICE PRESIDENT OF THE UNITED STATES:  I believe he is.  We made the decision, based on 9/11, that we no longer had a law enforcement problem, that we’re at war.  And Congress, in fact, authorizes, uh, the president to use military force to deal with that crisis.  And that puts you over into the — the category of being able to use all of your military assets, your intelligence assets and so forth, in order to protect the country against another attack.

ACOSTA:  Do you take issue with the vii— former vice president’s comments, Senator?

Not one person was fired.

Do you remember the 20th hjkk, Moussaoui, captured a month in advance?

In the FBI, they turned him down.  He wasn’t turned down — it wasn’t that they couldn’t get a warrant, nobody asked for a warrant.  To me, that were really, really bad intelligence, really bad police work and, really, someone should have been removed from office for that and they said he said this is never going to happen again.

I think you can catch terrorists and have protections of our freedom at the same time.  I know of no case that a traditional warrant wouldn’t have worked.

How do you plan on capturing your party’s nomination when your views on some of these issues are at odds with people like Dick Cheney and some of the hawks in your party on surveillance?

PAUL:  Well, you know, there was a poll out just this week that said well over 60 percent of Republicans think the NSA has gone too far, that they think your private phone calls and your records, you should have to have a warrant.

And so I think as we have a fuller debate on these discussions, you’re going to find that not only Republicans are with me on this issue, the youth are.  President Obama lost 20 points among the young voters in the last month.  And the reason he did so is because they see him now as a hypocrite who’s unwilling to defend the privacy of the Internet.

I think issues like this resonate beyond the Republican label.  And I think they’re going to help us become a bigger national party.  And…

PAUL:  — Republicans will find out that I will and I do say that we do everything we can to protect our country, consistent with our “Constitution.” That’s what we’re defending.

ACOSTA:  And let me ask you about another issue that’s re— resonating with a lot of younger voters, and that’s the issue of immigration.  I know that you have said a lot of the things recently indicating that you’d like to support a bill that would reform the immigration system in this country.

Earlier today, as you may know, House Speaker John Boehner said that he might abide by what’s called “The Hastert Rule,” uh, in that he might not bring the immigration bill to the floor of the House if it does not have the support of a majority of Republicans.

Uh, what do you make of that?

Is that a good idea?

PAUL:  Uh, yes, because I think if he encourages that and says that and makes it happen, then we’ll get a stronger immigration bill.  I am for immigration reform, but I think legalization of those who are undocumented should be dependent on border security.  The authors, the Gang of Eight in the Senate are saying, oh, no, let’s just legalize people with no conditions.

I say we legalize people, document them, find a place for them in our country, but do it dependent on securing the border first.

ACOSTA:  And I just wanted to ask you, “The Washington Post,” uh, came out with an item today.  Chris Cillizza with “The Fix” described you as “the most interesting man in the political world.”

I don’t know if you drink Dos Equis, but you are being held up there with the most important thing man in the world.

And then “The New Republic” described you as President Rand Paul, not being very subtle there.

You are running for president, right?

PAUL:  Well, you know, I think those are compliments, but I — you know, I think that I try to be genuine and honest and as a position, I look at things, I see problems in our country and I want to fix them regardless of whether it’s a Republican or Democrat label who’s supporting them, whether or not what I do in the future — we’re about a year away from making a decision.

But I do want to help the Republican Party grow and be more inclusive of people of all races and all walks of life, with tattoos, without tattoos.  I want everybody to think they have a place in our party.  So I am trying to make the party bigger.

Uh, thanks very much, Senator Rand Paul, for your time.