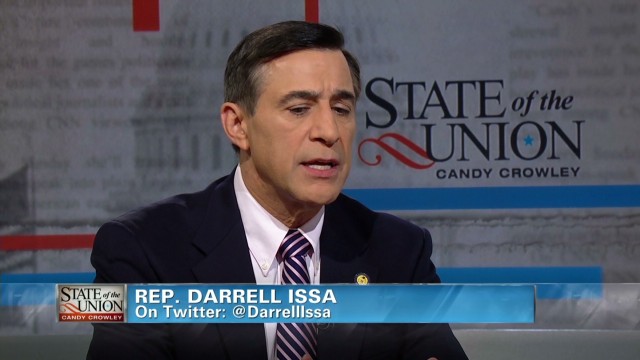 In an exclusive interview on CNN’s State of the Union with Candy Crowley, Republican Chairman of the House Oversight Committee Darrell Issa claims interviews with workers in the IRS Cincinnati office show targeting of conservative groups was “a problem that was coordinated in all likelihood right out of Washington headquarters and we’re getting to proving it.” Highlighted excerpts are after the jump, and a full transcript may be found here.

On interviews with IRS staff in Cincinnati
ISSA: The whole transcript will be put out.  We understand — these are in real time.  And the administration is still — their paid liar, their spokesperson, picture behind, he’s still making up things about what happens in calling this local rogue.  There’s no indication — the reason the Lois Lerner tried to take the fifth is not because there is a rogue in Cincinnati,  it’s because this is a problem that was coordinated in all likelihood right out of Washington headquarters and we’re getting to proving it.

On the IRS targeting conservative groups
ISSA:  My gut tells me that too many people knew that this wrongdoing was going on before the election.  And at least by some sort of convenient benign neglect, allowed it to go on through the election, allowed these groups, these conservative groups, these, if you will, not friends of the president, to be disenfranchised through an election.

On Attorney General Eric Holder
ISSA:  It would be kind to say he misled Congress.  It would be–

ISSA:  — less kind and more accurate to say that would rise to be a lie by most people’s standards.  By the American people’s standard, you don’t sign a warrant and then pretend you wouldn’t know about it, it wouldn’t come to you.

One of the things about perjury, this is the attorney general.  Don’t use perjury lightly.  Perjury is a criminal charge that has to be proven.  But certainly it’s hard to have confidence in what this attorney general says or his people say when so often it turns out not to be true.

CROWLEY:  Do you think he should resign, yes or no?

ISSA:  That’s up to the president.