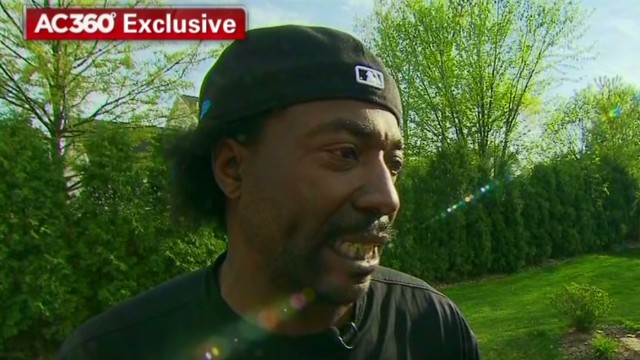 Ramsey tells Cooper that his neighbor of about a year was “cool, he was no freak of nature” but yesterday he heard a girl scream “like a car had hit her kid.” Amanda Berry told him “I’ve been trapped in here and he won’t let me out. It’s me and my baby.” Berry, he tells Cooper “was well-groomed. She didn’t look like she was kidnapped… That’s what threw me off.”

Ramsey says he doesn’t feel like a hero, and when asked about a rumored reward, he shows Cooper his paycheck and says “give it to them (the girls).”

Video link to the interview and rough transcript below. Please credit all usage to Anderson Cooper 360°

THIS IS A RUSH FDCH TRANSCRIPT. IT MAY NOT BE IN ITS FINAL FORM AND MAY BE UPDATED.

COOPER:  Well, I just came back from interviewing Charles Ramsey just a short time ago.  Here’s some of that interview.

COOPER:  And so you moved in about a year ago.  You’d seen Ariel Castro around, right?

CHARLES RAMSEY:  When I moved there, only because he was my neighbor.

RAMSEY:  You know what I mean?

RAMSEY:  Cool.  He wasn’t no freak of nature.  He was like me and you, because he talked about the same things you talk about.

RAMSEY:  You talk about you.  You know what I mean?  You know, regular stuff, bro.

COOPER:  So yesterday, what happened?

RAMSEY:  I’m going to tell it all.  Around 3:00, I was on my porch and the mailman put his mail in my mail.  I looked at it like here’s his mail when he come home.  Couple of minutes later, he pulled up.  He checked the mailbox, grabbed his paper.  Before he went in the house, I said Ariel, here goes your mail.  We just had the same conversation when I hand him the mail.  He said, they can’t get it right.  I said, damn postal service.  That’s it.

He left.  I jumped on my bike, went to McDonald’s.  Came back home, I’m in my house, but I’m in the living room and I’m right by the front door, because I’m looking out the front door, and man, this girl screamed like a car had hit a kid, which made me, you know, stop eating, what the hell was that.  You know, so when I got up, I saw this — my neighbor across the street, he run across the street and I’m, like — I’m thinking, where you going, because ain’t nobody next door because I just saw Ariel leave.

And I know ain’t nobody over there.  Heard that girl scream and saw him run across the street, and I went outside and wondered what he was doing, and — Amanda said, I’m stuck in here, help get me out.  So he — guy don’t know English that well or panicked, he just looked at me and it’s a girl.  And that’s all he did.  So here I come with my, you know, half eaten Big Mac and I looked and I said well, what’s up.

And she’s like I’ve been trapped in here, he won’t let me out, me and my baby.  I said well, we ain’t going to talk no more, come on.  I’m trying to get the door open, I can’t, because he torture chambered it some kind of way and locked it up, right?  So I did what I had to do and kicked the bottom of the door, and she crawled out of it.  She grabs her baby, which threw me off, all right, so fine.  I got some girl and her kid.

COOPER:  What did she look like?  I mean, what was she wearing?

RAMSEY:  Jumpsuit.  She had a white tank top on, rings on, mascara.  You know, she was well groomed.  She didn’t look like she was kidnapped.  That’s what I’m saying.  That’s what threw me off.  She was like I’m in here trapped.  I’m like, well, you don’t look kidnapped so maybe you got a boyfriend problem.  But I’m thinking I know who lives here and he’s 50 something.  You can’t be the boyfriend problem.  You know?  It can’t be him.  Maybe you’re dating his son.

COOPER:  And you’d never seen her before?

COOPER:  In the year that you had been there?

RAMSEY:  Bro, that man, listen, never.  That woman didn’t come out the house.  The only kids that came out the house were two little girls.  They played in the backyard.  He had two dogs and my — where I live naturally is next door, my bedroom was upstairs so when I hear kids playing, I know it’s them.  They did the same thing, play in the backyard for a couple of hours, go back in the house.  Same thing every day.

The neighborhood knows them as his grandchildren.  So no big deal.  He had his grandkids over all the time, I thought.

RAMSEY:  Mm-hmm.  And I took her to my house.  Now I’m nervous as hell so I’m fumbling with my phone, so I finally get it right.  She can’t wait and I don’t blame her.  So what I do was tell her go across the street and use their phone.  Now we’re both calling 911.  Now she gets through and I get through.  She deal with a moron, me, too.

COOPER:  You said there — what do you mean, a moron?

COOPER:  And the woman kept —

RAMSEY:  Shouldn’t have a damn job.

COOPER:  The woman was like hang up and wait for the police.

RAMSEY:  Really.  How about stay on and I will talk to you until they get there?

Let us know what you think.  Follow me on Twitter right now @andersoncooper.  So many questions still to be answered here.

Also ahead, we’re going to hear from a young woman who along with her friends once called 911 because they say they saw a naked woman in the suspect’s backyard.  She says police thought they were joking, didn’t take it seriously.  We’ll be right back.

RAMSEY:  Heard her screaming, I’m eating my McDonald’s, I come outside, and I see this girl going nuts trying to get out of a house.  So I go on the porch.  I go on the porch and she says, help me get out, I’ve been here a long time.  So you know, I figured it’s a domestic violence dispute.  So I opened the door and we can’t get in that way because how the door is, it’s so much that a body can’t fit through, only your hand.  So we kicked the bottom and she comes out with a little girl, and she says call 911, my name is Amanda Berry.

COOPER:  If not for the actions of Charles Ramsey and another neighbor who helped him, the three women may still be in that house here in Cleveland.

Here’s more of my exclusive interview with Charles Ramsey.

COOPER:  How quickly did the police get there?

RAMSEY:  You know what, they got there so fast because I said moron.  Because I said hey, Amanda Berry is right in front of me right now.  Here’s what she got on and I told him white tank top, blue sweatpants, nice tennis shoes, nice ponytail.  What else?  Oh, right.  She’s panicking, idiot.  Put yourself in her shoes.  Like I said, Amanda Berry, that don’t ring no damn bells, you being a cop and all?

COOPER:  But you — when you first saw her and she said the name Amanda Berry, did it —

RAMSEY:  It didn’t — I didn’t know.  Because I forgot.  Bro, this is Cleveland.  Since they haven’t found that girl.

RAMSEY:  And I guess stopped looking for that girl, we figured that girl was — met her demise.

RAMSEY:  So Berry didn’t register with me until I was on the phone like, wait a minute, I thought this girl was dead.

COOPER:  What does it — what does it feel like to have been living next to this for a year?

RAMSEY:  See, that’s why now I’m having trouble sleeping.  See, up until yesterday, the only thing that kept me from losing sleep was the lack of money.  See what I’m saying?  So now that that’s going on, and I could have done this last year, not this hero stuff, just do the right thing —

COOPER:  Because there’s a lot of people, they’re saying you’re a hero.

RAMSEY:  No, no, no.  Bro, I’m a Christian, an American, and just like you.  We bleed same blood, put our pants on the same way.  It’s just that you got to put that — being a coward, and I don’t want to get in nobody’s business.  You got to put that away for a minute.

COOPER:  Because you know how it is.  There’s a lot of people who turn away.

RAMSEY:  You have to have cajones, bro.

COOPER:  Keep walking down on the street.

RAMSEY:  That’s all what it’s about.  It’s about cajones on this planet.

COOPER:  Has the FBI said anything about a reward or anything?  Because there was that — there was a reward for finding her.

RAMSEY:  2203 Seymour.  Where are them girls living?  Right next door to this paycheck.  So yes, take that reward and give it to — that little girl came out the house and she was crying.  And I’m looking at her, right, I’m like your mama trying to help you, girl, shut up.  I don’t know, right.  And she’s like I want my daddy.  And I said, who’s her daddy?  She said Ariel.

COOPER:  She said that.

RAMSEY:  Yes.  I said well, how’s that possible?  Because you wouldn’t — if you got kidnapped, he was having sex with you?  Oh, Jesus.  That little girl is his?  Now we want to hurt you.

COOPER:  You felt that?

RAMSEY:  Bro, this will be a different interview, I told you that, if we had known that.  Man, I would be facing triple life.

COOPER:  Wow.  I’m glad it turned out this way.