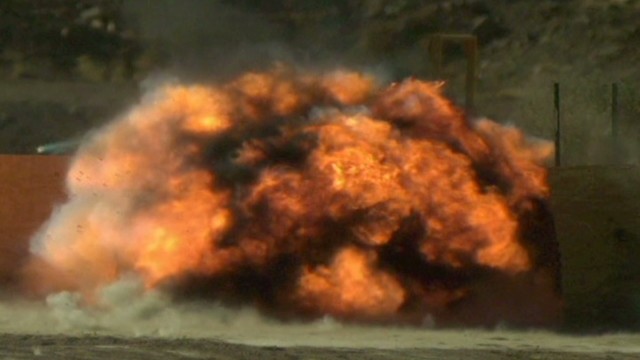 On the trail of reporting more details about how the pressure cooker bombs that exploded near the finish line of last week’s Boston Marathon worked, CNN’s David Mattingly traveled to New Mexico for an Erin Burnett OutFront investigation to meet with Van Romero of New Mexico Tech.  Romero’s team replicated a bomb designed to be similar to the two that exploded in Boston.

Even before seeing the white smoke, Mattingtly reporting feeling the shockwaves emitted from the blast over a quarter mile away – faster than the speed of sound.  It would have been likely that survivors and victims in Boston were injured before they ever heard the explosions.  In addition, the flying hot shrapnel from the device strewed out radially in the form of thousands of weapons that would have been destructive to flesh and tissue.

Romero also had an additional warning for first responders: “unexploded ordinance…parts of the bomb that didn’t explode …that could go off at any time.”