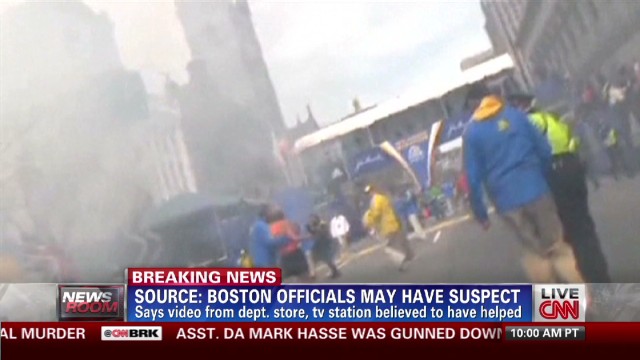 Update from 2:43 p.m. ET:
THIS IS A RUSH FDCH TRANSCRIPT. IT MAY NOT BE IN ITS FINAL FORM AND MAY BE UPDATED.

I know, John, you’ve been working your sources.

JOHN KING, CNN HOST:  I’ve been working sources.  I want to echo what Joe just said, and I was one of the people who was first on the air when we said Fran Townsend had a federal source saying an arrest had been made; I had a Boston source saying we got him.  I want to go through this.

I’m told they have now checked as high as the attorney general of United States who would know if there was an arrest that has been made.  This law enforcement source that just communicated with us said, “Significant progress has been made, but no arrest.  Anyone who says an arrest is ahead of themselves.”

I went back to the Boston law enforcement sources who said we got him, I said, Got him?  Identification on arrest?  The source says can’t talk to you right now, says there is significant blowback at the leaks.  Says there will be more information later today.

One of the federal sources I was just communicating with said, “Even to say it’s an identification, a specific identification, is to go too far.”  But then I circled back, several Boston and state law enforcement officials say we have identified, based on the enhanced video.  They call it a significant breakthrough in the investigation.  But, clearly, there has been some significant confusion and question of an arrest.

CHRIS CUOMO, CNN ANCHOR:  Legally it means — we do know a little bit.  It’s a little bit of a term of art.  Identification means this guy, that’s all it means.  Doesn’t mean they have a name.  It doesn’t mean he’s recognizable.  It could just mean we’re looking for this —

From a CNN spokesperson:

“CNN had three credible sources on both local and federal levels.  Based on this information we reported our findings.  As soon as our sources came to us with new information we adjusted our reporting.”

Ahead of the arrest in the Boston bombings case, CNN’s John King reported the below news. King continues to report on the latest developments.

CNN BREAKING NEWS ALERT: Investigators believe they have identified a suspect in the Boston Marathon bombings, a source who has been briefed on the investigation told CNN’s John King.
The source said what officials believe is a breakthrough came from analysis of video from a department store near the site of the second explosion. Video from a Boston television station also contributed to the progress, this source said.

From that analysis, the source said, authorities believe that they have identified a suspect.

The source declined to be more specific but called it a significant development.