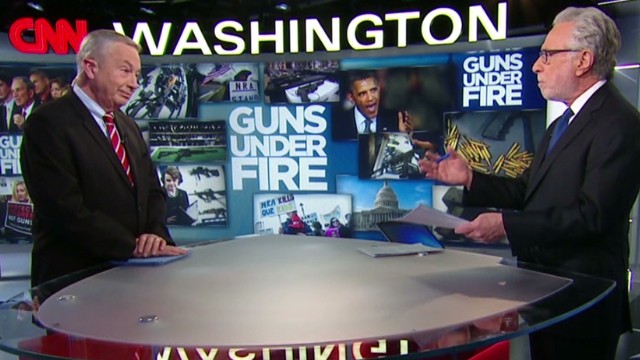 CNN’s Wolf Blitzer challenges the executive director of The Gun Owners of America, Larry Pratt to answer questions about background checks and more. Highlights from the interview are after the jump and a full transcript will be posted on http://archives.cnn.com/TRANSCRIPTS/sitroom.html. This interview is part of CNN’s in-depth coverage Guns Under Fire: A CNN Special Report on Background Checks. More information: http://on.cnn.com/14Sxu7o

Highlights from Full Interview:
THIS IS A RUSH FDCH TRANSCRIPT. IT MAY NOT BE IN ITS FINAL FORM AND MAY BE UPDATED.

BLITZER: Because these are the — your supporters, correct me if I’m wrong, they think the National Rifle Association is too moderate.

PRATT: Only 5 percent of the NRA members supported it when they were polled.  So, when you actually ask the people involved — maybe we have a reason to suspect how these polls are put together —

PRATT: I think they do violate —

BLITZER: But the courts disagree with you.  The Supreme Court disagrees with you.

BLITZER: Do you believe mentally ill people – do you believe criminals, felon, terrorists, should be able to go to a gun shop or a gun show or go to an individual and buy a weapon without any background check?

PRATT: No, we think they should be in jail or in an institution.

BLITZER: Well, what if they are not?

PRATT: Well, then that’s the fault of a liberal criminal justice system.

PRATT: You mean like the dirt bag in Newtown?

BLITZER: — but they do have some mental illness. They’ve never committed a crime.  How do you check that if you don’t have a background check?

PRATT: You mean like the dirt bag in Newtown?

PRATT: I’m answering your question with this set-up because the murderer of Newtown killed his mother, took her guns, didn’t bother with a background check.

BLITZER: There’s no one saying that background checks are going eliminate all gun violence in the United States. But what’s wrong with making it more difficult?

PRATT: Because the background check is national gun registration.  And all that’s on the table right now is to make that a more comprehensive gun registration scheme than we’ve already had.

BLITZER: Joe Manchin, who has a pretty good record with the NRA, Pat Toomey, Republican of Pennsylvania, have introduced this compromise legislation today. An excellent record with the NRA. They support the Second Amendment to the Constitution.  They want to expand background checks. Why are they wrong?

BLITZER: But you know, if you support the First Amendment to the Constitution, free speech, but you can’t cry fire in a crowded theater.  There are restrictions on amendments —

PRATT: Because that’s committing an actual crime.  That’s not a prior restraint on the use —

BLITZER: Killing someone with a gun is not a crime?

PRATT: That’s a crime.  But you’re talking about prior restraint.  You and I didn’t have to go through a sensor before we went on this show. But what you’re proposing is precisely that and then  keep a registry of it.

BLITZER: You tweeted today, and I’ll put it up on the screen, “May Senator Toomey experience in 2016 the same as he did to Senator Specter” – the late Senator Specter of Pennsylvania – “in 2010.”  What kind of a threat is that?

PRATT: Well, it means that he ought to be held politically accountable and the way to do it is in the primaries —

BLITZER: Because he supports expanding background checks, you think his voters should kick him out of office.

PRATT: We’re going to be making that argument.

BLITZER: You’re going to be going after him aggressively politically.

PRATT: We’re going to look for a viable candidate. And if we find one, then we will —