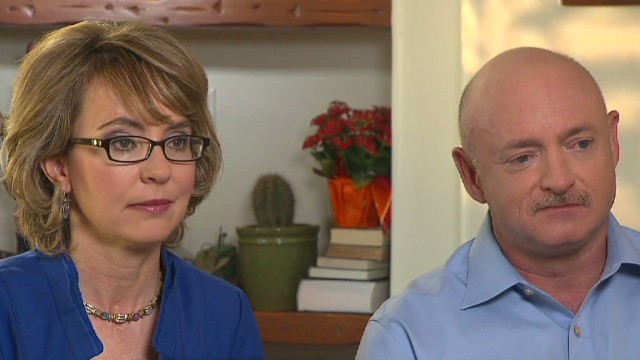 Former congresswoman Gabby Giffords and her husband, Mark Kelly, tell CNN chief congressional correspondent Dana Bash that they continue to own guns for recreation. For target practice, Kelly uses the same type of gun Giffords was shot with, a 9mm Glock, but with a magazine that can hold 17 rounds. The Tucson shooter had a magazine that held 33 rounds. Giffords and Kelly are long-time gun owners who support Second Amendment rights.

Bash sat down with Giffords and Kelly for an exclusive television interview, the first from inside their home in Tucson, Arizona. This interview is a glimpse at Giffords’ life now, her road to recovery and the couple’s work on their newly formed gun-control organization. When Bash asked Giffords if she was resentful, Giffords replied, “No.  No….. No.  Move ahead. Move ahead.” Dana’s full interview will air tonight on Anderson Cooper 360° at 8 and 10pm ET on CNN.

Highlights from Interview:
THIS IS A RUSH FDCH TRANSCRIPT. IT MAY NOT BE IN ITS FINAL FORM AND MAY BE UPDATED.

BASH: And Kelly isn’t shooting with just any kind of gun. MARK KELLY, HUSBAND OF GABRIELLE GIFFORDS: This is the same kind of gun Gabby was shot with, a Glock, a .9 millimeter Glock, but in that case, it had a magazine that held 33 rounds. This, when it’s full, holds 17. He shot 33 rounds. Every round hit somebody, we think.

BASH (on camera): How long have you had this gun?

KELLY: Well, I gave this to Gabby as a gift.

KELLY: A number of years ago. She’s a gun owner. She’s from the West.

BASH (voice-over): Still, we asked the question a lot of incredulous people seeing this scene would ask.

(on camera): Really? This guy Sort of still gets his kicks or recreation for him is shooting a gun after his wife was shot through the head?

KELLY: Well, Gabby used to like shooting a gun, too, occasionally.

BASH:  How is that possible?