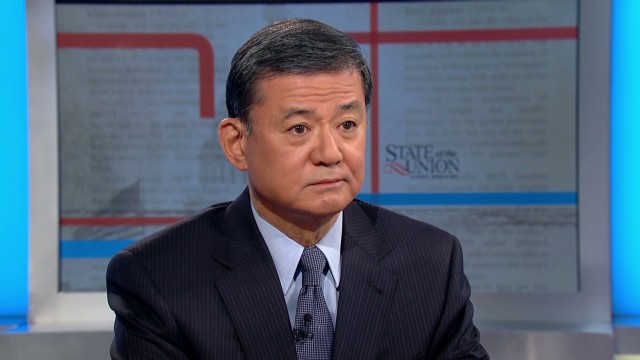 Secy. Shinseki to Candy Crowley “No veteran should have to wait for claims as they are today”

Today on CNN’s State of the Union with Candy Crowley, Secretary of Veterans Affairs General Eric Shinseki spoke exclusively with CNN’s Candy Crowley about the backlog at his department, healthcare and more in his first Sunday interview. And in the noon hour of the program, chief policy officer of Iraq and Afghanistan Veterans of America Tom Tarantino and executive director of the American Legion Peter Gaytan spoke with Crowly about her Shinseki interview. Full transcripts of all interviews will be available on http://archives.cnn.com/TRANSCRIPTS/sotu.html; a highlight is after the jump.
MANDATORY CREDIT: CNN’s “State of the Union”

Highlighted Excerpt
THIS IS A RUSH FDCH TRANSCRIPT. THIS COPY MAY NOT BE IN ITS FINAL FORM AND MAY BE UPDATED.

CROWLEY: Why is it that veterans themselves get the sense that the VA is an impenetrable bureaucracy? Because again, after five years it seems like that’s enough time to streamline this process.

SHINSEKI: Veterans in the last four years, Candy, have joined us in unprecedented numbers. There are 800 more veterans enrolled today than were enrolled four years ago in health care. 940,000 more veterans enrolled for benefits than there were four years ago. So, the fact is that veterans are coming to us, and they are being enrolled. We produce a million claims decisions each year going out the door and have for the last three years. And so, when we talk about an inventory of claims today, of about 875,000 claims, of which about 600,000 are backlogged. Just the amount of work we put out the door indicates that this is not a static number.  There are going to be a few who are complex enough to go longer than we’d like, but there is a lot of work being done