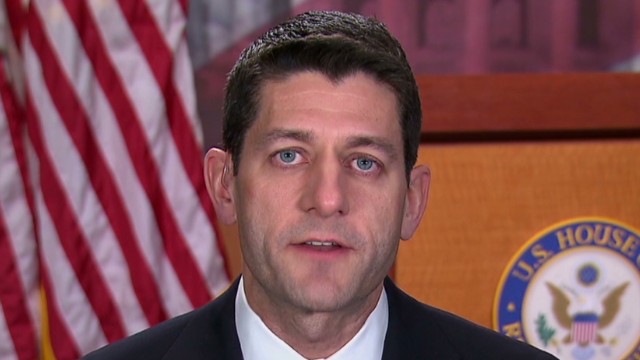 Rep. Paul Ryan on Pres. Obama to CNN : The question on sincerity is really one that time will tell

Today on CNN’s The Situation Room with Wolf Blitzer, Rep. Paul Ryan (R-WI) spoke with CNN about gun legislation, immigration, budgets and more. Highlights from this interview are after the jump; a full transcript will be posted on http://archives.cnn.com/TRANSCRIPTS/sitroom.html.

Highlight from Full Interview:
THIS IS A RUSH FDCH TRANSCRIPT. IT MAY NOT BE IN ITS FINAL FORM AND MAY BE UPDATED.

BLITZER: Let’s look ahead.  I assume your budget will pass the House tomorrow.  But you know it isn’t going to pass the Senate.  What happens next?

RYAN: Well, the Senate budget was brought on the floor today here as well, and didn’t pass the House.  So, therein lies –

BLITZER: So, what is going to happen?

RYAN: Therein lies the issue.  Where I’m cautiously optimistic on this, Wolf, is at least the Senate is doing a budget.  In the past four years, the Senate hadn’t done a budget.  That means the process stopped.  What we call regular order, where the House and the Senate pass a budget, then you try to reconcile the differences —

BLITZER: You had lunch with him. [President Obama]  What was your impression?

RYAN: I enjoyed our lunch.  I thought we had a very frank and candid conversation.  I got the impression he wants to get something done, that he believes the window of getting things done is finite.

The question on sincerity is really one that time will tell, which is will he reengage the campaign in just a few short months?  Will he focus on the campaign against Republicans for 2014, or will he work to bridge the partisan divide?  The question is, will he go back to impugning our motives, making it impossible for compromise to occur? Or will he produce an environment where people of different parties can talk to each other so that we talk more and end up finding common ground and getting an agreement at the end of the day.

Time will tell. I’m hopeful but  — you know, it’s trust but verify, as far as I’m concerned.

BLITZER: If there is no deal by the end of July, early August, will you vote to raise the nation’s debt ceiling?  Because that’s when it has to be raised.

RYAN: Well, I think this will come down to all of that. I’m not going to get into what we will or will not do.  I do believe that we can make sure that default is not going to happen.  I’m not really worried about us defaulting.  I think we can give the authority to the president to prevent default from happening.

But I have to tell you, Wolf, we can’t keep running up deficits like this.  It will damage our economy deeply, and people are saying that we don’t have a crisis on the horizon.  Of course we do.  We’ve got a debt that is on a tear right now.  And if the debt takes off like it’s projected to do, it’s not only hurting our economy today, it’s destroying it for the next generation.  And we just can’t sit around and be complicit with that.  That means the problem, we have to do something about that.

—
BLITZER: Senator Rand Paul yesterday was here in THE SITUATION ROOM, 24 hours ago.  He said flatly he is going to Iowa in the next few weeks.  He is seriously thinking of running for the Republican presidential nomination in 2016.  He thinks that is a good idea for him.  What about you?

RYAN: I’m going to make my mind up later.  The reason why — I think I need to do this job. I’m the chairman of the Budget Committee. When we have a budget crisis on our horizon, we’ve got to get these agreements done.  And I don’t think it’s good for me, it’s good for the Wisconsin first district, it’s good for my colleagues to cloud my judgment at this time with other things.

I need to do what I think is right in this moment working on the budget.  I have a leadership position.  I take it seriously. And I don’t want to cloud it with ideas of what I may or may not do in the future.  I want to do the right thing now.  Then I’ll consider those things. And I will give it serious consideration, but I’m going to do that later on.