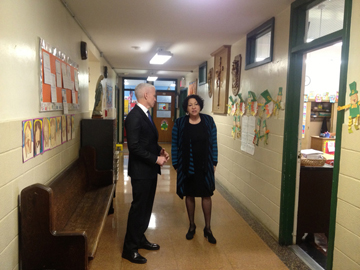 In an exclusive interview that will air tonight on Anderson Cooper 360°, Cooper spoke with Supreme Court Justice Sonia Sotomayor. Sotomayor took Anderson to her grammar school which is being closed because of Catholic Church finances.

Sound bites from the interview are below. The full interview will air tonight at 8 & 10pm ET.  Video will be available after the show.

Anderson Cooper: A lot of the alumnae that I’ve talked to are angry; they’re upset that it’s closing.

Sonia Sotomayor: So am I. It’s hard not to be. I know for some of them and, you know I’m a public figure so I can’t complain; it’s not an easy choice for a church. They have obligations to the entire world and they have limited resources. No one is infinitely rich. And they have to do what they think is best. But for this community who didn’t feel like they had enough time to adjust to the news or enough time to be able to try to change the decision. That type of process leaves people very unhappy.

Cooper: Do you think intrinsic to the mission of the Catholic church is, is educating the poor… is offering a good education to the poor? And if so…

Sotomayor: It’s administering to the faith… And to the extent that the parents who send their children to these schools are parents like my own, who actually have faith in the church. Faith that it will provide their children with safety, a decent education and values about life and others. This is an institution that stands for all good in the world.

Cooper: So what do you make of the fact that it’s not just this school? I mean when 20 schools are being closed, mostly the poor…

Sotomayor: It’s almost all poor immigrant areas. Look, the schools that suffer are the schools in, in poor neighborhoods. They are the neighborhoods with the greatest need, with the parents struggling to work and to make ends meet. They don’t have enough resources to give, they don’t have enough resources to pay more, and these are the neighborhoods that go first. And they’re the ones with the least resources to absorb the loss. Look, the local schools some of them are fabulous. But our kids don’t tend to live near them. If you’re poor, you don’t often live near a good school. If it’s a competitive public school program, our kids are not prepared to enter those programs. And so it’s loss, loss no matter how you look. When you have a place like this that’s within walking distance of public projects, where the houses are small, but well kept. People take pride in their home and their environment. These are people who rely on institutions like this to give their kids an opportunity in life.

Cooper: Would you have been able to become the person you are, the position you are without this school?

Sotomayor: Doubtful. As you may know from my life story, my cousin who was my soul mate went to a public school. And he died of AIDS. Would I and my brother have been able to resist the lure of drugs in the surrounding schools? Who knows.

Cooper: Your mom worked hard to send you here?

Sotomayor: My mom worked six days a week most of her adult life to be able to afford to come here. And we were one of the scholarship kids when my dad died. They, we were a two-fur. Two kids for the price of one. And if it hadn’t been for the generosity of the church, we would not have been able to afford this. But I think back then they would have never thought of kicking either of my brother or I out.