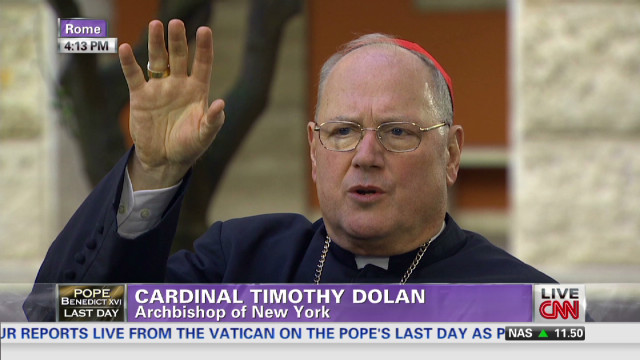 CNN’s Christiane Amanpour interviews Cardinal Timothy Dolan at North American College of Cardinals in Rome, on the last day for Pope Benedict XVI. Cardinal Dolan talks about the time he spent with Pope Benedict XVI and how he may vote during the conclave as a “rookie.”

“In a particularly radiant and personal way, the pope is supposed to remind us of Jesus,” Cardinal Dolan said. “We call him the vicar of Christ. So when we see him, we’re immediately elevated to the things beyond, the eternal truth and to the man who described himself as the truth – Jesus Christ…. That’s sort of thewhat you might call the supernatural characteristics that you look for. St. Thomas says grace builds on nature. What are the natural characteristics that we’re looking for? Well, you need a good pastor, somebody’s who’s good with people like Jesus was. You need somebody who is thoroughly versed in the tradition and the profound theology of our Catholic wisdom. Number three, you need somebody savvy about the church universal, who kind of is aware and conscious of the diverse needs of the Catholic family. Number four you need somebody who can get by in at least English and Italian and preferably some other languages, too.” He adds that he’s looking for someone with governing capacity.