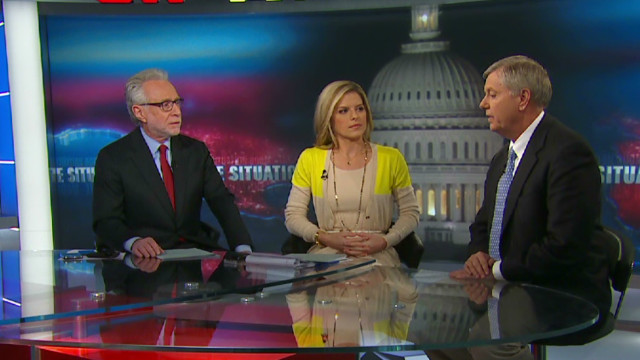 Sen. Graham to CNN: “Now is the time to grow up. Both parties need to grow up. We need to find a chance to do the big deal.”

Today on CNN’s The Situation Room with Wolf Blitzer, Sen. Lindsey Graham (R-SC) discussed his upcoming immigration meeting with the president, Hagel’s confirmation process and the forced budget cuts. A full transcript will be posted on http://archives.cnn.com/TRANSCRIPTS/sitroom.html.

Sen. Graham on White House Meeting,  “It doesn’t happen every day.  Yes, we’re going to talk about immigration.  But I hope we’ll talk about this.  Now is the time to grow up.  Both parties need to grow up.  We need to find a chance to do the big deal.  I’ll challenge the president.  Mr. President, let’s do things that will straighten out the long-term indebtedness of the country.  Stop talking about between March and October.  Talk about the next 30 years.  I’ll raise revenue. Will you reform entitlements?  And both together, we’ll set aside sequestration in a way that won’t disrupt the economy and hurt the Defense Department.”

On forced budget cuts: “Here’s what I don’t understand.  We’re the party of fiscal conservatism. Have we put a plan together to cut $85 billion between March and October? No.  The House passed a plan to substitute sequestration.  The Senate Republicans have it — have yet to offer a plan.  ….I challenge any member of Congress to come up with a proposal to cut $85 billion out of the federal budget between March 1st and October 1st.”