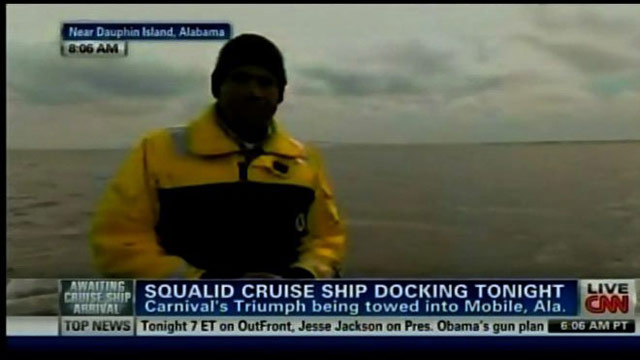 The squalid, smelly, steamy cruise ship, which has been without power for days with 4,000 people aboard, is expected to finally limp into port later today.  CNN’s Erin Burnett will anchor Erin Burnett OutFront from Mobile, Alabama, where the ship will dock.  Sandra Endo cover the ship’s arrival by helicopter; Victor Blackwell monitors by boat; and David Mattingly and Martin Savidge report from the dock in Mobile. CNN.com/live and the CNN apps will live stream the docking. CNN International will simulcast the arrival later tonight.

Image of David Mattingly at the port in Mobile, AL where the passengers will disembark

Image of Martin Savidge at the port in Mobile, AL where the passengers will disembark

Image of Sandra Endo from a helicopter flying over the cruise ship.

VIDEO: Carnival passenger Slyvester Davis tells CNN’s Wolf Blitzer she asked her farther, “Since this was a botched graduation gift can we get another one – possibly a flight or a road trip?”  http://on.cnn.com/UkubBf