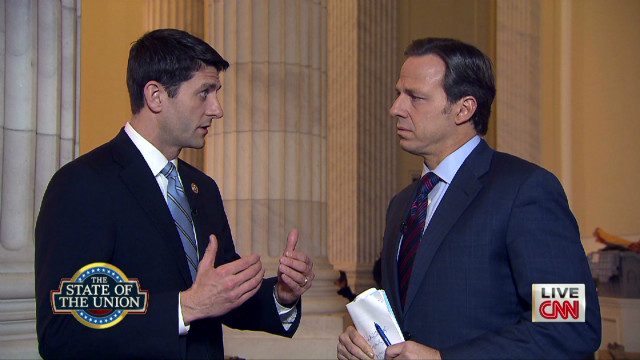 Rep. Paul Ryan: “He underplayed the enormity of the task before us, which is to confront a debt crisis”

In his first post- State of the Union Address interview, Congressman Paul Ryan (R-WI) spoke with CNN anchor and chief Washington correspondent Jake Tapper live from the U.S. Capitol with his reaction. A full transcript of the interview is after the jump.
THIS IS A RUSH FDCH TRANSCRIPT. IT MAY NOT BE IN ITS FINAL FORM AND MAY BE UPDATED.

WOLF BLITZER, CNN ANCHOR:  Florida Senator Marco Rubio delivering the official Republican response and offering a very, very different vision for the future than the president did just moments ago in his State of the Union Address, a different vision on a whole host of domestic issues, setting the scene, setting the scene potentially for some bitter partisan battles in the weeks and months to come with a lot at stake for the American people.

Jake Tapper is watching what’s going on.  Jake, this was a very significant contrast we heard from Senator Rubio as opposed to the president.

JAKE TAPPER, CNN ANCHOR:  That’s right.  I am actually standing here right now with the man who gave that thankless task of a speech a year ago, Congressman Paul Ryan, Republican of Wisconsin, the chairman of the House Budget Committee, and also, of course, Mitt Romney’s vice-presidential running mate.

First of all, you predicted before the speech that you feared the president would take a hard turn to the left.  Is that what you heard this evening or no?

REP. PAUL RYAN (R-WI), CHAIRMAN, BUDGET COMMITTEE:  Well, in some areas I think he was productive.  I thought on comprehensive immigration reform, I thought his words were measured.  I think the tone and the words he took were productive on that front.

He listed a laundry list of new programs that ought to be created.  He said they won’t cost another dime.  The problem is we’re already a trillion in the hole, he dramatically overstated the deficit reduction of his administration without counting any spending that had occurred during his administration.

So I think he underplayed they enormity of our task before us on a debt crisis, on deficit reduction, which is really threatening to our economy.  So I think what you got was kind of a traditional laundry list, I guess I would say, from a liberal perspective, of new programs and things like that, without really talking about what these will really cost and how it affects our economy.

TAPPER:  But you do — you did hear immigration reform as an area…

RYAN:  Yes, I thought that was…

TAPPER:  … where you could move forward?

RYAN:  … pretty productive.  I think, you know, when you have — when you are in the legislative arena and we’re trying to get a comprehensive bipartisan agreement here, the words he uses matters.  And he used what I thought was a measured tone which gives me a sense that he is trying to get something done.

So he used measured words that were productive with respect to immigration.  I think that’s an area where we have a good chance of getting something done.  There are clearly other areas where we have to work together.

But what I am concerned about is he underplayed the enormity of the task before us, which is to confront  a debt crisis.  He is suggesting that there is not much work to be done to reduce the deficit and get this debt under control.  And that’s just not the case.  There is a lot of work to be done.

TAPPER:  There is a lot of work to be done.  He also mentioned your former running mate, Mitt Romney, or I guess he is your former — whatever.

RYAN:  I know who you are talking about.

TAPPER:  As supporting tying the minimum wage to cost of living.  Is that something that you could support?
RYAN:  I have never been a fan of that idea.  I think it is inflationary.  I think it actually is counterproductive in many ways.  You end up costing jobs from people who are at the bottom rung of the economic ladder.  Look, I wish we could just pass a law saying everybody should make more money without any adverse consequences.

The problem is you end up costing jobs from those who are just trying to get entry-level jobs.  The goal ought to be, is to get people out of entry-level jobs, into better jobs — better-paying jobs.  That’s better education.  That’s a growing economy.  Those are some of the things he talked about and I don’t think raising minimum wage, and history is very clear about this, doesn’t actually accomplish those goals.

TAPPER:  And one other last thing.  You’ve talked a lot about the insurmountable task of — well, you haven’t called it an insurmountable task, but the challenge of solving the deficit problem.  Would you ever be willing to vote for a package that included some tax increases, even if it was just closing loopholes, closing some of the ones that the president talks about on the stump, you know, corporate jets and that sort of thing?

RYAN:  Well, I supported the “fiscal cliff” agreement.  That already raised revenues by about $650 billion.

TAPPER:  Right.  But I am talking about a future plan.

RYAN:  So here is the issue.  We to want make sure that we have tax reform.  He said two things.  He wants tax reform and then he said, close loopholes.  Well, closing loopholes to spend more money in Washington means you’re denying the ability to do tax reform because it is from these loopholes that we do tax reform.

By closing loopholes you can lower rates and do tax reform that create jobs and can grow the economy.  That’s what we’re in favor of.  Lots of Democrats agree with us.  If you take those loopholes for spending, which is what I heard tonight, then you’re making it virtually impossible to actually get tax reform.

So what we want, smart spending cuts, not across-the-board like he is suggesting.  We want entitlement reforms.  And we want tax reform which, of course, means closing loopholes so we can lower tax rates to get economic growth.

That’s the secret of success.  That’s where there is a lot of bipartisan support for, but I didn’t quite hear that from the president tonight and that’s a cause for concern.

TAPPER:  OK.  We’re going to have to continue our discussion when you come on my new show, which is live in March.

TAPPER:  … now you’re going to be one of the first guests.

TAPPER:  And now we’re going to throw to Chris Cuomo to have more analysis of the president’s State of the Union Address, and, of course, Marco Rubio, senator from Florida, his Republican response — Chris.

CHRIS CUOMO, CNN ANCHOR:  All right.  Thank you, Jake.  Good plug for the show, by the way.