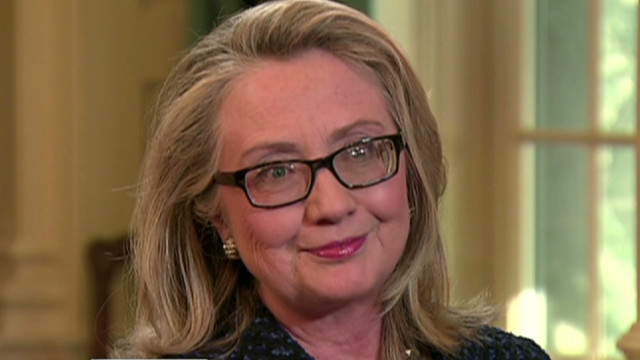 Secy. Clinton on Ready for Hillary PAC: “Is there really?”

Today CNN foreign affairs correspondent Jill Dougherty and CNN foreign affairs reporter Elise Labott sat down with Secretary of State Hillary Clinton to talk about her health, next steps and foreign policy. Part of this  interview aired in the 4pm ET hour of The Situation Room with Wolf Blitzer; additional portions of the interview will air in the 5 p.m. ET and 6 p.m. ET hours of the program. Highlights from the interview are after the jump; a full transcript will be available on http://archives.cnn.com/TRANSCRIPTS/sitroom.html.

Highlights from Full Interview:
THIS IS A RUSH FDCH TRANSCRIPT. IT MAY NOT BE IN ITS FINAL FORM AND MAY BE UPDATED.

DOUGHERTY:  Madam Secretary, thank you very much for talking with CNN.  You know, I was thinking, I’ve been following you around for 20 years reporting on you, and Elise and I have been on the plane flying around with you for four years.  So it’s very nice to be able to talk with you at this turning point in your life.

CLINTON:  Thank you.  And thanks to both of you.  I’ve enjoyed having you be part of the flying circus…

… to traverse the globe, and appreciate the attention that CNN pays to international news stories.  It makes a big difference.

DOUGHERTY:  Great to hear that.

DOUGHERTY:  … 60 people, approximately, dead.  The head of the army says that the state could actually fall apart, disintegrate.  Is he right?

CLINTON:  Well, I hope not, because I think that would lead to incredible chaos and violence on a scale that would be devastating for Egypt and the region.  But there has to be some understanding by the new government that the aspirations that the people were expressing during the revolution in Egypt have to be taken seriously.  And it — it cannot in any way be overlooked that there is a large number of Egyptians who are not satisfied with the direction of the economy and the political reform.

This is not an easy task.  I have to jump in and say that, you know, we can sit here and talk about it from a distance.  It’s very difficult going from a closed regime and a — essentially one-man rule, to a democracy that is trying to be born and learn to walk.  But there are some clear lessons.

So I think the messages and the action coming from the leadership, you know, has to be changed in order to give people confidence that they’re on the right path to the kind of future they seek.

LABOTT (?):  Well, there are a lot of women leaders around the world.  In April, you told Wolf Blitzer for 2016, “That’s not in my future,” but you seem to be — I don’t now leaving some wiggle room there.

CLINTON:  No, no.  I am so looking forward to Monday when I have no schedule, no office to go to, no responsibilities.

LABOTT (?):  You know the field?  I’m sorry Madam Secretary, you know the party says that the field is clear and open for you until you make your decision.

Have you decided that you absolutely will not run?

CLINTON:  Well, I have absolutely no plans to run…

We heard this morning all of these people asking you if you can run.  There’s a PAC just registered, “Ready for Hillary.”

CLINTON:  Is there really?

LABOTT (?):  Are you going to tell these people to stand down?

Everyone is waiting for that.

CLINTON:  Well, you know, right now, I am trying to finish my term as secretary of state.  And the president and I had a good laugh the other night because, you know, I am out of politics right now.  And I don’t know everything I’ll be doing.  I’ll be working on behalf of, you know, women and girls.  I’ll be, hopefully, writing and speaking.  Those are the things that I’m planning to do right now.

DOUGHERTY (?):  You’re interested in women, development, health issues.  So what do you do?  Is there a chance that you would all work together, like (inaudible)

CLINTON:  I hope so.  I mean, that’s one of the things we have to really work out is — I’m very proud of what my husband has done in the last 10 years.  I mean, his — his foundation, his entrepreneurial philanthropy with the Clinton Global Initiative, his great work on getting the price of AIDS drugs down so that more people could get treatment, and so much else.  And he is also focused on the health of children here in this country through the Healthy Alliance.

So he’s doing things that resonate with me as well as with him.  And we’re gonna look to see how we can join our efforts together.

LABOTT (?):  She says she wants to lead a life of public service.

CLINTON:  No, I don’t know about that.

CLINTON:  I think — I think she is really focused on the philanthropy.  You know, she did a great — great service after Hurricane Sandy.  She took a large group, about a thousand people that were put together through our foundation and through CGI to go and do a lot of difficult manual work for people who had been just devastated.

You know, she and — and Bill and I, we are — we just have public service in our DNA.  That doesn’t have to be political service.  It can be what we’re doing now and what Bill has been doing now.

So I think we’ll work all that out.  It’s gonna be fun to talk it through and figure, you know, what our — our next adventures might be.

DOUGHERTY:  Let’s move to Benghazi.  There have been a lot of questions.  You’ve answered a lot of questions, but there’s one in particular.  You know, the signs were there.  The British ambassador had been attacked.  The walls of the embassy had been breached.  Why didn’t you connect the dots, ask the question:  Wasn’t it too dangerous for Chris Stevens, the ambassador who was one of the most valuable people you had in that region?  Why didn’t you ask that question?

CLINTON:  Well, we were certainly aware of the increasing threat environment.  I — I not only was briefed on that, I testified to that effect.  And there were constant evaluations going on.  But no one — not the ambassador, security professionals, the intelligence community — ever recommended closing that mission.

And the reason they didn’t was because the ongoing threat environment had, up until the spring before our terrible attack in Benghazi, been a result of post-conflict conditions.  That — that is something that we’re familiar with all over the world.

Yes, there were some attacks, as you have said, but our evaluation of them and the recommendation by the security professionals was that those were all manageable because we have a lot of that around the world.  I mean, there is a long list of attacks that have been foiled, assassination plots that have been prevented.

So this is not some, you know, one-off event.  This is considered in a — in an atmosphere of a lot of threats and dangers.

And at the end of the day, you know, there was a decision made that this would be evaluated, but it would not be closed.  And, unfortunately, we know what happened.

WOLF BLITZER, CNN:  But right now, we have something just coming in, Secretary of State Hillary Clinton in her final days on the job sitting down with CNN for what is being described as an exit interview.  She talked about her recent health problems, including that blood clot that had her in the hospital.  Listen to what she just told our own Jill Dougherty and Elise Labott.

JILL DOUGHERTY, CNN FOREIGN AFFAIRS CORRESPONDENT:  … that if you had one blood clot, there is two times chance that you will have another one.  This is something that you’re going to have to deal with for a long time.

DOUGHERTY:  Do you take medication?

CLINTON:  Well, that’s what people do when you have blood clots, and then you get evaluated after the blood clot has resolved, because, as you say, I have experienced this before.

But I am lucky because I have been very healthy.  I feel great.  I have enormous amounts of energy that have to be harnessed and focused.  So I’m very fortunate, and I’m looking forward to this next chapter in my life, whatever it is.

BLITZER:  The full interview, by the way, with the secretary of state, it will air here in THE SITUATION ROOM in the next hour, as well as at 6:00 p.m. Eastern.  She goes through a wide, wide range of issues, including national security issues and what about 2016?  Is she really interested in running for president again?

The interview will be airing here in THE SITUATION ROOM.