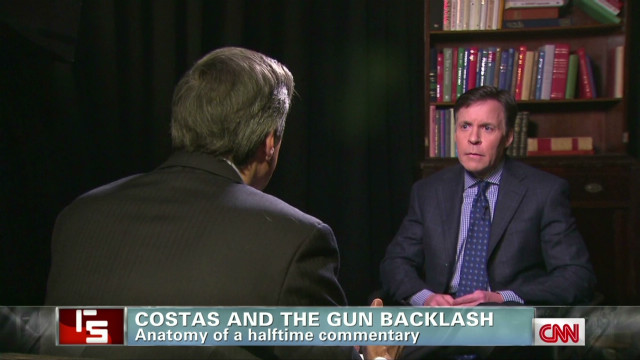 Bob Costas on the gun control controversy: “I could have handled it better”

CNN’s Reliable Sources host Howard Kurtz spoke with NBC News sportscaster Bob Costas in his first interview since the week of Costas’ controversial comments on gun control. In the wide-ranging interview, Costas discussed the guns controversy and challenged the newsworthiness of the Manti Te’o story.

Transcript excerpts are after the jump and a full transcript may be found here.

Costas to Kurtz on the gun control controversy
THIS IS A RUSH FDCH TRANSCRIPT. IT MAY NOT BE IN ITS FINAL FORM AND MAY BE UPDATED.

HOWARD KURTZ: So looking back — and you’ve had a lot of time to think about this — was it a bit of a busted play?  Did you — could you have handled it better?

BOB COSTAS:  Oh, I could have handled it better and I think, given the amount of time that I had, I probably would have been better off just crafting my own short statement and kind of realizing that it could not have been as complete as what I wanted it to be.

Costas to Kurtz on Manti Te’o

HOWARD KURTZ: There have been a lot of sports controversies that have broken into the headlines and the network newscasts — Manti Te’o sits down with Katie Couric this week to talk about the imaginary girlfriend and the hoax and this whole tangled tissue of lies. Would you have wanted to do that interview?

BOB COSTAS:  I would have been, at best, ambivalent and maybe leery of doing the interview because it seems to me like a tabloid story.

HOWARD KURTZ:  It’s a great story about a college football hero who said he was inspired to play harder because his girlfriend had died.  And we learn that this girlfriend, who he had this online relationship with, never existed.

BOB COSTAS:  Yes, to me, there are two aspects that make this a story bigger than Manti Te’o, which would legitimize it.  One, why is it necessary that we have all the mythology that surrounds sports?  Look, I grew up a sports fan.  I bought into a lot of that mythology and I hope that some of it is still true.