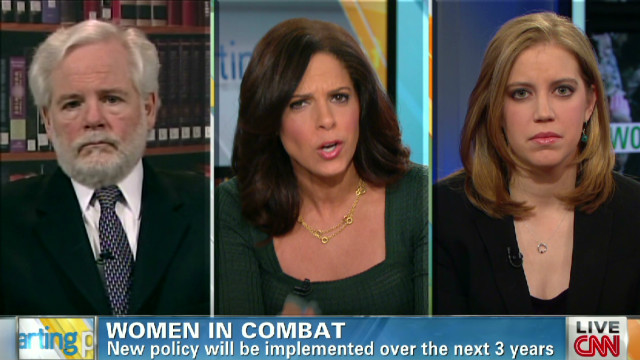 US Marine Corps Captain Zoe Bedell and “Co-Ed Combat” Author Kingsley Browne debate the impact of overturning the ban on women in combat. Bedell, who along with three other female veterans sued the Pentagon over this issue, says that unit cohesion will remain strong through this transition just like it is through the elimination of Don’t Ask Don’t Tell. Browne argues that the military will have to lower physical standards to allow women to compete because of the “very little overlap in physical capacity between men and women.”

When CNN Anchor Soledad O’Brien references a quote by an unnamed colonel, ‘The army is not a sociological laboratory to be effective, but as we organize, train according to the principles, which will ensure success, experiments, are a danger to efficiency, discipline, moral and would result in ultimate defeat,’ Browne agrees.

O’Brien then reveals that she was referencing someone in 1941 who was referring to excluding black people in the military.

Browne disagrees with the analogy.