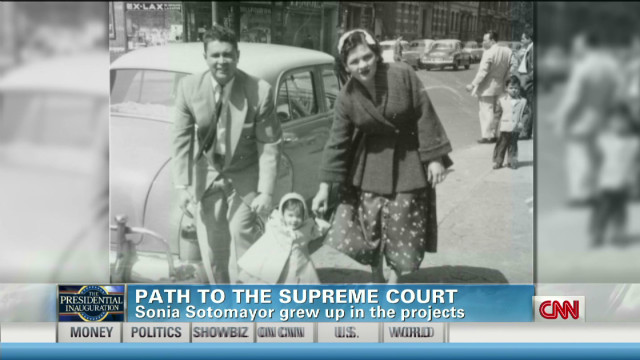 Supreme Court Justice Sonia Sotomayor talks to Starting Point Anchor Soledad O’Brien about her experience in Princeton’s affirmative action program, its impact on ruling on affirmative action cases and criticism that she asks too many questions.

Justice Sotomayor says, “Everyone around me was so totally different in looks and backgrounds from anything I had been exposed to in the tiny microcosm of my world in the Bronx. And so, to land in a place like Princeton with this collegiate architecture – its grandeur bigger than anything I had ever experienced in the places I’ve lived – it is so foreign, that you really feel like an alien.”

O’Brien asks if her history of affirmative action affects her ability to rule on cases on the subject. Justice Sotomayor responds, “Every judge has life experiences. We don’t say to a judge who’s had a physical illness, ‘You can’t judge a case about disabilities.’ We don’t say to a judge who has felt betrayed or denied something because of affirmative action, ‘You can’t hear this case.’ You trust, and I think rightly, in our system of rule of law in appreciating judges are aware of the things that might influence them and understand that they have an obligation to ensure that their decisions are not based on their personal feelings, but based on the law.”

Regarding the criticism that she asks too many questions, Justice Sotomayor says, “Well, I know that [Justice Clarence Thomas] has a different opinion than I do. He doesn’t ask any questions. And some say I ask too many. I think I’m finding a happy middle ground. And I think many of my questions make people think about the issues in a different way. I don’t ask my questions to forecast an outcome. I do it to ask each side what I think are the hardest questions so they can address those questions, and as I explained earlier, convince me.”

Visit the CNN Press Room for additional highlights from the network’s special coverage of the second inauguration of President Barack Obama: http://on.cnn.com/T6ba6n