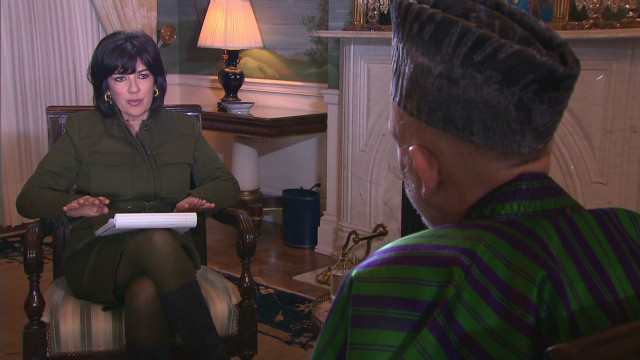 Afghanistan’s President Hamid Karzai, spoke exclusively with Christiane Amanpour in Washington, DC, during his visit to the United States, and following his afternoon press conference with U.S. President Barack Obama.

The wide-ranging interview covered topics including the drawdown of U.S. troops, military equipment requests by Afghanistan to the U.S., and the immunity request by the U.S. before committing security forces to reinforce the military transition beyond 2014.  The 30-minute interview will air in its entirety on CNN International during the Monday, Jan. 14th edition of Amanpour.

Specifically on the topic of the status of forces agreement for the immunity of U.S. military personnel who would remain in Afghanistan after 2014, President Karzai suggested that he would be able to convince the Afghan people that this is necessary.  The following is an excerpt from the interview:

AMANPOUR:  Are you ready to agree to immunity for U.S. forces?  The president, in his press conference with you, made it very clear, no immunity, no U.S. troops.

KARZAI: Yes, we discussed this in detail today.  We have discussed it on other occasions previously.  Afghanistan sovereignty, as you referred to earlier, is for us the, you know, untouchable.  That cannot be compromised. That cannot be touched.

And that’s the reason at times we were so intensely at loggerheads with the U.S. government, civilian casualties and questions of our sovereignty, or interference or lack of full respect to that sovereignty.

And immunity is the principle thing that they want.  So I will argue for it.  And, I can tell you with relatively good confidence that they will say, all right, let’s do it.

AMANPOUR:  So you just made a bit of news. You believe there will be immunity if you’re satisfied that your sovereignty is respected?

KARZAI: If I’m satisfied, if the Afghan people are satisfied, surely they will consider it favorably.

AMANPOUR: And you think that that’s a likelihood?

KARZAI: It is quite a likelihood.