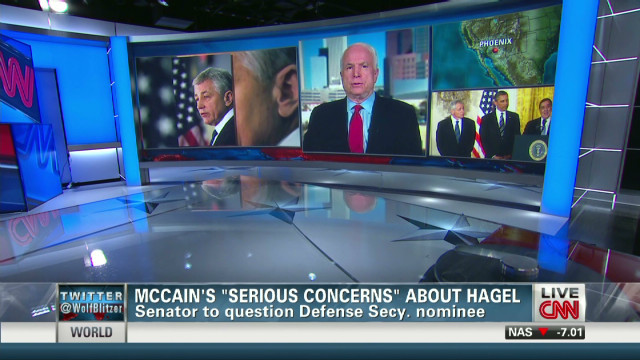 Sen. McCain: My biggest concern is his [Hagel] overall attitude about the United States…

Sen. John McCain (R-AZ) talked with CNN’s Wolf Blitzer today about President Barack Obama’s nomination of former Sen. Chuck Hagel to become the next defense secretary. McCain said, “Well, my biggest concern is his overall attitude about the United States, our role in the world, particularly in the Middle East, and whether we should reduce the Pentagon further, but mainly, his general overall world view.”  A full transcript of the program will be available on http://archives.cnn.com/TRANSCRIPTS/sitroom.html; highlights are after the jump.

BLITZER:  Let’s get to Chuck Hagel, first of all.  You released a pretty strong statement.  Among other things, you wrote this.

“I have serious concerns about positions Senator Hagel has taken on a range of critical national security issues in recent years, which we will fully consider in the course of his confirmation process.”

So you had the chance to question him.  What’s your biggest concern?

MCCAIN:  Well, my biggest concern is his overall attitude about the United States, our role in the world, particularly in the Middle East, and whether we should reduce the Pentagon further, but mainly, his general overall world view.

Chuck Hagel and I are friends.  I appreciate and honor his service in the Vietnam conflict and we have worked together on a number of issues.

I have noticed over the years that our views on the United States of America and what we should be doing in the world has diverged rather dramatically, and I guess the best example of that is the surge in Iraq.

We both knew that we were losing the war in Iraq.  Lindsey Graham and I and Joe Lieberman and others said we need a surge and the president somewhat reluctantly adapted that — the surge and it succeeded.

Now, what the president did afterwards is another discussion.  But Chuck Hagel, at the time, made a rather unusual statement, at least to me, and said that the most dangerous foreign policy blunder in this country since Vietnam, and then, somehow, in his statement in the Foreign Relations Committee, compared it to the invasion of Cambodia.

Now, that, to me is — and I’ve never heard him contradict that statement or change his position about the surge.

We lost over 2,000 young Americans in Iraq and we could have succeeded there.  As you noticed, it’s unraveling now, because the president decided to get out without a residual force.  But the surge did succeed, and Senator Hagel, obviously, said it couldn’t and he called it the biggest blunder since the Vietnam War.  That is a really — a gross misconception of America’s role there and in the world.

BOLDUAN:  That was from the 2000 National Republican Convention.

And in 2006, you’re quoted as telling “The New York Times,” “I’d be honored to have Chuck with me in any capacity.  He’d make a great secretary of state.”

so Senator McCain, what happened to the friendship?

MCCAIN:  The friendship, I hope, is still there.  We just — our views began to diverge rather dramatically about the role of the United States in the world, as I just explained, not only as far as Iraq was concerned, Iran, sanctions on Iran, which he voted against, blocked in one set of sanctions.

Basically took a view of the Iranian threat, which I don’t think has been justified by events that followed.  And several other areas on — in national security policy.  I respect, admire and call him a friend but I have very serious questions about whether he will serve in the way that I think serve America’s best national interests.

But I want to have the hearings; I would like to hear him make his case and I will reserve judgment.

BLITZER:  You also have serious questions about John Brennan to become the next director of the CIA.  The statement you released on his nomination, you said, “I have many questions and concerns about his nomination to be director of the CIA, especially what role he played in the so-called enhanced interrogation programs, while serving at the CIA during the last administration.”

MCCAIN:  Well, I’ve never heard anyone say that, at the time, they heard Mr. Brennan object to the waterboarding and the other techniques which were in violation of the Geneva Conventions, which the United States is a signatory to.

Second of all, there are some incidents that took place on his watch which has still not fully been investigated.

And I also believe that there’s also serious questions about the information that Mr. Brennan gave from the White House after the bin Laden raid, such as the identification of SEAL Team 6, a story about how they believed that bin Laden had reached for a gun or — a number of statements that he made.