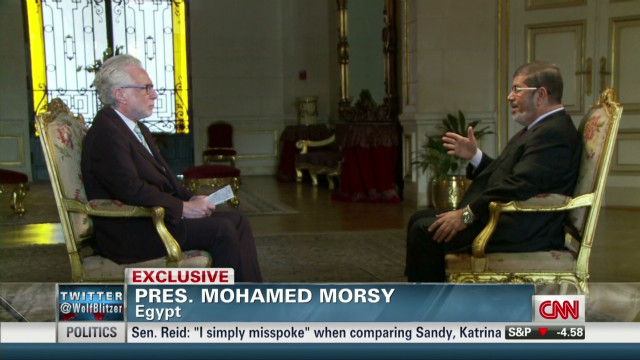 Egyptian Pres. on the release of blind Egyptian cleric: “I want him to be free…”

CNN’s Wolf Blitzer sat down this past weekend in Cairo for an exclusive interview with Egypt’s President Mohamed Morsy. Egypt’s president said that he is planning to visit the United States, “before the end of the first quarter of this year.” During that visit, Morsy said he would like to speak with President Barack Obama about the release of the blind Egyptian cleric who was convicted in connection with the 1993 World Trade Center bombing: “I want him to be free, but I respect the law and the rule of law in Egypt and the United States. What I am talking about isn’t a violation.” A highlight from the interview is after the jump and the full interview will continue to air this week on The Situation Room with Wolf Blitzer, 4 p.m. to 7 p.m. on CNN and CNN International.

Highlighted Excerpts from Full Interview
THIS IS A RUSH FDCH TRANSCRIPT. THIS COPY MAY NOT BE IN ITS FINAL FORM AND MAY BE UPDATED.

WOLF BLITZER, HOST:  He’s the highest profile leader to emerge from the Arab Spring revolutions and Mohamed Morsy’s tenure as president of Egypt has been marked by controversy. I sat down with him yesterday at the presidential palace in Cairo for an exclusive one hour interview, during which Morsy revealed his plans to visit the United States soon.

MOHAMED MORSY, PRESIDENT, EGYPT (through translator):  God willing, I will plan for this trip.  There is no set date yet, but it will most likely be before the end of the first quarter of this year.

I respect him and I value him.  He played an effective and important role in the cease-fire in regards to Gaza and the end of attacks against Gaza.  He cooperated with us in a big way and I’m still in constant communication with him.  When we meet, there will be a chance to talk about cooperation in different areas, like scientific research, manufacturing and production, investments and tourism.

BLITZER:  So you plan on coming to the United States, god willing, inashallah, as we say, in the first quarter of this year, between now and the end of March?

MORSY:  Before the end of the first quarter, god willing, I will visit, as you said I will visit, the United States of America.  And I will be happy with this visit.

BLITZER:  I also asked the Egyptian president about the blind Egyptian cleric who was convicted here in the United States in connection with the 1993 World Trade Center bombing.  Omar Abdul Rahman is serving a life sentence in a U.S. prison.

BLITZER:  Just clarify your position on what you want the U.S. government to do as far as the — the blink sheikh is concerned, who’s being held in prison in the United States, convicted of his involvement in the blowing up of the 1993 World Trade Center bombing incident?

MORSY:  I want him to be free, but I respect the law and the rule of law in Egypt and the United States.  What I am talking about isn’t a violation.  I don’t want a violation of the rule of law, but there are also many humane aspects.  There could be things like visitation, assistance, his children, his family, assisting him.  He is an old sheikh and sick and blind.

We need to respect that in this sheikh.

Is there a chance for him to be freed?

I wish this, but considering my respect and appreciation for the American rule of law and the American government, our relationship, Egypt’s relationship with America deserves that these issues be reviewed, if that is OK according to the law.

I wish that there could be a big possibility for the American administration to look into this matter about this sheikh, who is very old, without there being, I don’t intend on violating the rule of law in anyplace.  And I don’t like anyone asking me to violate the rule of law in my own country.

But the humane aspects, at the very least, need to be guaranteed.

BLITZER:  Will you make this appeal directly to President Obama when you see him?

MORSY:  When I meet with him, I will talk to him about this issue.