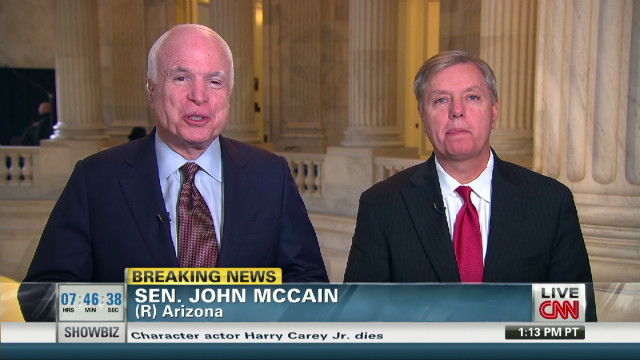 Sen. McCain predicts, “A whole new field of battle when the debt ceiling rolls around.”

Today on CNN’s The Situation Room with Wolf Blitzer, Sens. John McCain and Lindsey Graham joined Blitzer from Capitol Hill to discuss the latest with the fiscal cliff negotiations. A highlight from the interview is after the jump and for a full transcript of the program please visit http://archives.cnn.com/TRANSCRIPTS/2012.12.31.html.

Highlight from Interview
THIS IS A RUSH TRANSCRIPT. THIS COPY MAY NOT BE IN ITS FINAL FORM AND MAY BE UPDATED.

BLITZER:  Senator Graham, I know you agree on that specific issue with Senator McCain.

And back to the president’s performance today, that was pretty unusual, to have a — kind of a pep rally in the middle of negotiations.  What John said about defense cuts going into effect, shooting the military in the head, according to Secretary Panetta, is real and true.

MCCAIN:  Wolf, the president, during the campaign and just before said sequestration won’t happen. He didn’t say it might not, didn’t say – he said it won’t happen.  So I hope he would keep to that pledge in these negotiations that are going on.

GRAHAM: Can I just add something, Wolf? We’ve made about 10 different proposals to offset the effects of sequestration on the Defense Department and other areas of the government until March of this coming year, that’s about 22 billion. They say “no” to everything.  We’ve got three and a half trillion dollars to choose from and trying to find and offset for three months, it’s ridiculous.  You can’t find an offset for three months.

BLITZER: Are you going to use the raising of the debt ceiling in February or March, Senator McCain, as leverage to get what you want from the President?

MCCAIN: I think there’s going to be a whole new field of battle when the debt ceiling rolls around.  Most of us have pledged that we’re going to have to, before we vote again to raise the debt ceiling even though it may be a great political cost, we’ve got to address spending.  And that meant entitlements. We’ve got to sit down together and get us back on a path.  Look, we just added 2.1 trillion in the last increase in the debt ceiling, and spending continues to go up. I think there’s going to be a pretty big showdown the next time around when we go to the debt limit.
###