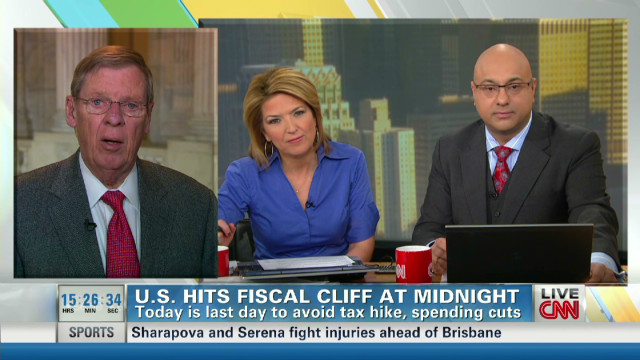 Just before the Senate convenes at 11am ET today to work on a plan to avoid the fiscal cliff, Senator Johnny Isakson (R-GA) tells Starting Point that he believes that a bipartisan agreement on revenue has been reached, but it’s now a question of whether the money will go to more spending or deficit reduction.

Sen. Isakson says, “First of all, I’m not sure we have the inside information, but I do believe the revenue issue is no longer a question. The question is making sure any new revenues go to debt spending reduction and deficit relief rather than new spending. It’s deficits that got us into this problem. It’s only reducing deficits that get us out of this problem.”

When CNN’s Ali Velshi asks him to clarify if a revenue deal has been accepted, Sen. Isakson responds, “No, that’s not my best information, but it’s my best belief that they’ve reached an agreement on revenues. What that level is, I don’t know, but the question now is where those revenues go. If they go to new spending, we’re going to have a problem making a deal because spending has been our problem. But if they go towards deficit reduction, which ultimately will be debt relief, that will be a good thing, and we probably will have a deal.”