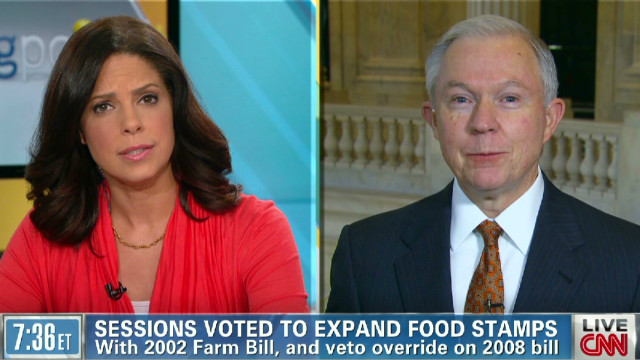 Senator Jeff Sessions (R-AL) tells CNN’s Soledad O’Brien why he thinks the food stamp program should be considered in the fiscal cliff negotiations. When he says the program has been “growing out of control,” O’Brien points out that he voted for increases in 2002 and 2008.

Sen. Sessions says, “Every part of the government needs to be available for improvement. What we found was in the Budget Control Act and the sequester, there was no cuts, not a dime reduced in the food stamp spending, which has gone up four times. One in six Americans are now receiving food stamps. It’s going up this month was a record increase in food stamp participation, at a time when unemployment is declining.”

When O’Brien asks why he is “trying to balance the budget over people that make less than $23,000” and why he doesn’t cut something else, Sen. Sessions says everything should be on the table.