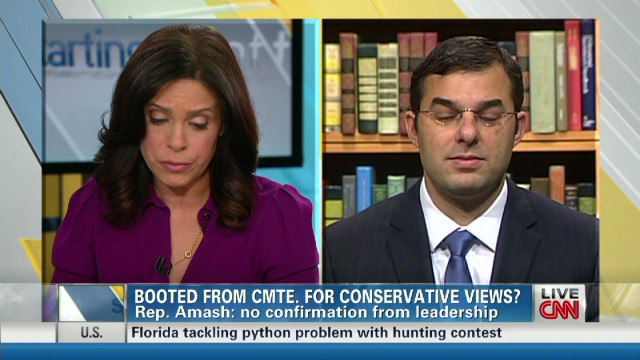 Rep. Amash (R-MI): GOP leadership is out of step with America; not committed to re-election of Speaker Boehner

Rep. Justin Amash (R-MI), who was booted from the House Budget Committee, says that a solution to the fiscal cliff must be bipartisan and he is not sure if he supports the re-election of Speaker John Boehner to his leadership position. Rep. Amash heard of his release from the committee from news reports.

Rep. Amash says, “I would again push back on this idea that it is some kind of Tea Party versus moderate versus mainstream theme. People like me are out there are calling for reductions in Pentagon spending, calling for working with the Democrats. And actually if you look at the four people who were removed from the Committee, we’ve been the ones who’ve been willing to work with Democrats on a lot of these tough spending issues.”

When O’Brien asks if he thinks Speaker Boehner should be fired, Rep. Amash responds, “We’re going to see how the next few weeks go. And whether he’s willing to make amends. And put out that scorecard. Let the American people see what he based the decision on.”