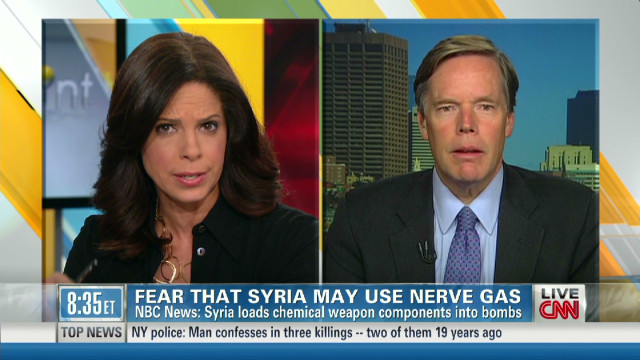 Former U.S. Ambassador to NATO and Harvard Professor Nicholas Burns says that there will be “negative repercussions” if Syrian President Bashar al-Assad uses chemical weapons against his people and that he will lose the civil war.

Burns says, “The Syrian government would have to think long and hard before using those weapons. There’ll be all sorts of negative repercussions from them including the threat of military intervention. And I do think the Russian government will not want to see Syria use chemical weapons or let them out to the control of rebel forces.”

When O’Brien asks if Assad is desperate enough to use weapons on his own people, Burns answers, “It’s really impossible to tell. The Syrian government spokespeople have been saying over the last couple of days under no circumstances will they use them, except for foreign military intervention. But, Assad is desperate. His back is against the wall. He is going to lose in this civil war. The rebels have made extraordinary advances over the last couple of days. So he’s got to be thinking about either exile or perhaps creating an enclave within Syria where his Alawite clan can defend themselves perhaps along the Mediterranean coast.”