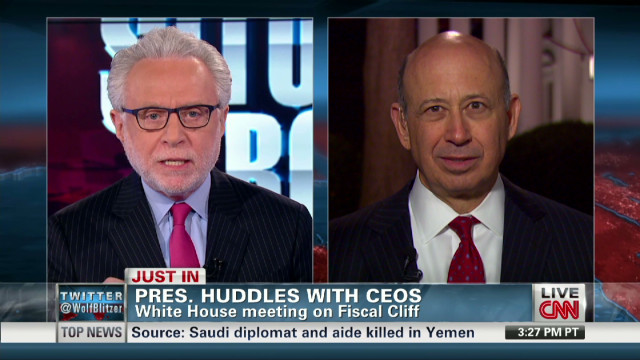 Goldman Sachs CEO Lloyd Blankfein spoke with Wolf Blitzer after his meeting with President Obama about his thoughts on preventing the looming fiscal cliff. A full transcript of the program will be posted on http://archives.cnn.com/TRANSCRIPTS/sitroom.html .

HIGHLIGHT FROM INTERVIEW
THIS IS A RUSH FDCH TRANSCRIPT. IT MAY NOT BE IN ITS FINAL FORM AND MAY BE UPDATED.

BLITZER:  So does that mean you would support the president when he says go ahead and increase that highest marginal tax rate from 35 percent to 39.6 percent, where it was during the Clinton administration, for families — for incomes above $250,000 a year?