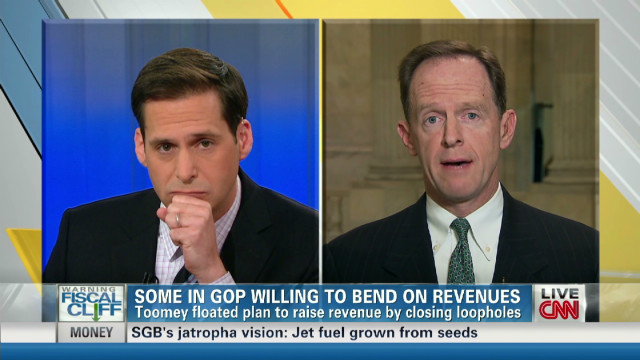 Senator Pat Toomey (R-PA) addresses the fiscal cliff negotiations and says he’s open to closing loopholes and reducing deductions, if we lower marginal rates and decrease spending. However, he says he would not violate Grover Norquist’s Taxpayer Protection Pledge by doing so.

Sen. Toomey says, “The revenue side isn’t where the problem lies in the first place. This is a side show to the real problem – the real problem that the President has refused to address. How are we going to put our entitlement programs on a sustainable path? How are we going to live within our means? Now if we’re going to do something on the revenue side, then for Gosh sakes let’s at least not damage the economy any more than we have to. And so let’s do it by lowering marginal rates and generating revenue through reducing the value of deductions, write-offs and loopholes – the kinds of things that destroy economic activity.”

When CNN’s John Berman points out that closing loopholes and reducing deductions would violate Norquist’s Taxpayer Protection Pledge, Toomey answers, “I don’t intend to violate any pledge. My pledge is not to support higher taxes. What we’re faced with in just a few weeks is a massive tax increase. If I can help ensure that we don’t have that tax increase, then I believe I’ve fulfilled my pledge to fight for the lowest possible taxes.” Berman adds that Norquist may disagree with him.