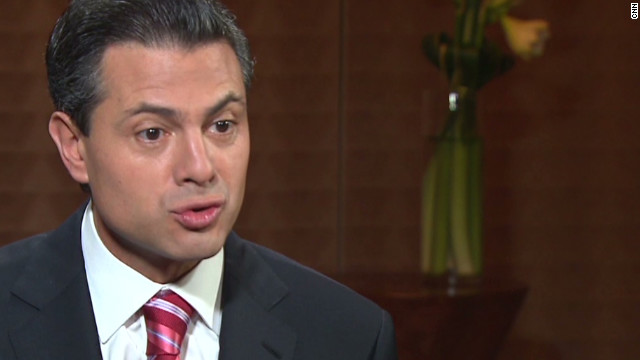 Blitzer sits down with Mexican President-elect

Ahead of the Mexican President-elect’s meeting with President Obama today at the White House, Enrique Peña Nieto sat down with CNN’s Wolf Blitzer to talk about U.S. relations with Mexico, trade and more. This full interview will air today on The Situation Room with Wolf Blitzer in the 5 p.m. ET hour. A highlight from the interview is below and a full transcript will be posted on http://archives.cnn.com/TRANSCRIPTS/sitroom.html.

HIGHLIGHT FROM INTERVIEW
THIS IS A RUSH FDCH TRANSCRIPT. IT MAY NOT BE IN ITS FINAL FORM AND MAY BE UPDATED.

ENRIQUE PENA NIETO, PRESIDENT-ELECT, MEXICO:  To build a greater trust in our relationship.  I think this first encounter with Mr. Obama, this first meeting, the main meeting — purpose will be to get to know each other, because I’m convinced that a good relationship between the countries has to go through the people who head said governments.  They will have a good understanding.