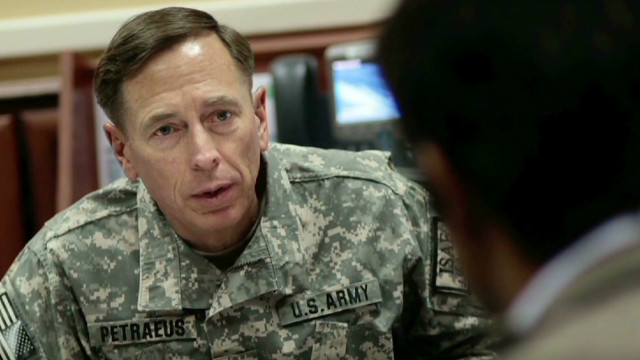 Kyra Phillips: “Petraeus was very clear that he screwed up terribly — it was all his fault.”

(CNN) — David Petraeus’ resignation was not linked to the September attack that killed four Americans in Benghazi, Libya, and he never passed classified information to the woman he was having an affair with, the former CIA director told an HLN journalist.

Petraeus, in conversations with HLN’s Kyra Phillips, confirmed to her what his supporters have been saying about the ongoing scandal.

“In our first conversation,” Phillips said Thursday, Petraeus “had told me he had engaged in something dishonorable. He sought to do the honorable thing in response — and that was to come forward. He was very clear that he screwed up terribly … even felt fortunate to have a wife who is far better than he deserves.”

Phillips, who has interviewed Petraeus in war zones, initially reached out to him to express shock at the news of the affair that derailed a highly decorated career in the military and CIA.Photos: Who’s who in the Petraeus scandal

Among other things, Petraeus said he has not talked withPaula Broadwell, his biographer and woman he admitted an affair with, since the scandal broke.

“He insisted to me that he has never passed classified information to Paula Broadwell,” Phillips said. “He said this has nothing to do with Benghazi, and he wants to testify. He will testify.”

The former CIA chief didn’t try to persuade his bosses to let him keep his job once he admitted the affair, and “has maintained to me all along this was a personal failing,” Phillips said.

Petraeus’ extramarital affair ended months ago. But it continues to make waves in Washington, as suspicions ripple through the capital about the timing of its revelation and Petraeus’ scheduled testimony into the September attack on the U.S. Consulate in Libya.

In addition, the chain of fiery e-mails that led the FBI to discover the sexual indiscretion has caused collateral damage, putting the imminent nomination of Gen. John Allen to the highest echelons of military command on hold, until the nature of his e-mail exchange with a military “socialite” and his relationship with her have been clarified.

The FBI investigation was triggered by Frederick Humphries, a veteran agent who is a friend of Jill Kelley,whose contacts with Allen are being reviewed, said Lawrence Berger, general counsel for the Federal Law Enforcement Officers Association.

Kelley contacted Humphries about anonymous e-mails that questioned her character and that led her to believe that someone was cyberstalking Petraeus and Allen.

Humphries took the information on the e-mails to the “appropriate components,” Berger said. “He reported it to the proper channels and had no further part in the case.”

Asked about reports that Humphries pestered the agents assigned to the case for information, Berger said that wasn’t the case.

“I don’t accept that. He followed proper protocols,” he said.

The investigation led to the discovery of the affair between Petraeus, 60, and Broadwell, 40.

The fallout has been widespread, but there are signs that the FBI investigation is winding down, said CNN contributor Tom Fuentes, a former FBI assistant director.

There is no indication of criminal activity on the part of Petraeus or that he disclosed classified information, senior federal law enforcement officials told Fuentes.

Kelley hosted top military brass at her home, but it’s unclear if Allen or Petraeus were aware of the Kelleys’ financial difficulties or the unusual background of a charity they founded.

Public records show that four years after the Kelleys purchased their $1.5 million home, Regions Bank filed to foreclose on the property, saying the couple hadn’t made a mortgage payment since September 2009.

Florida records show there are at least nine lawsuits involving money and the Kelley family, including large unpaid credit card bills of more than $320,000.

But in a telling 2008 federal tax return, the Kelleys’ charity reported that it spent the exact same amount of money as it raised — $157,000.

The charity’s money paid for parties, transportation, legal bills and other administrative costs. There is no evidence any of the money was used for cancer research or caring for cancer patients.

Asked for the Kelleys’ side of the story, a source close to the family told CNN the source didn’t have enough information to respond.

It appears unlikely that Broadwell would face prosecution in the case, a senior law enforcement official said.

Officials continued to review materials taken from her home, but it appears that any violations of releasing classified information appear not to be egregious.

At the same time, however, Broadwell’s security clearance with the government has been suspended, pending the outcome of the investigation, two U.S. officials with direct knowledge said.

Petraeus reportedly has not been following the media firestorm over the extramarital affair that led to his resignation.

“He wants to maintain a distance and focus on his family at this time,” his aide, retired Col. Peter Mansoor, has said.

He is dealing with the moral implications of his actions and the long healing process ahead.

The affair with Broadwell ended about four months ago, Mansoor said, though the two remained in contact afterward, as she needed his help to finish her dissertation.

In Congress, lawmakers from both parties have complained about not having been notified sooner of the investigation.

Sen. Lindsey Graham, R-South Carolina, is concerned about possible links between the timing of Petraeus departure and a congressional inquiry into the September attack in Libya, which killed four Americans.

In the Senate, the nature of the FBI’s investigation into Petraeus’ affair has also raised the ire of Senate Intelligence Committee Chairwoman Dianne Feinstein, D-California, who wants questions answered on “how it was instituted.”

Read more: How pillow talk could be security threat

I don’t think anybody ought to jump to conclusions.
Leon Panetta, U.S. Secretary of Defense

Separately, Secretary of Defense Leon Panetta has ordered a a review of existing ethics training programs “to determine if they are adequate,” he said in a memo to Gen. Martin Dempsey, chairman of the Joint Chiefs of Staff.

“I seek your views on how to better foster a culture of value-based decision-making and stewardship among senior general and flag officers,” Panetta said. He wants to send an interim report to President Obama by December 1.

Panetta has defended his request to withhold Allen’s nomination to NATO commander pending an investigation into his contacts with Kelley.

Defense officials have said Allen may have exchanged inappropriate e-mails with Kelley, who was a volunteer at MacDill Air Force Base in Florida.

In the wake of the investigations, the access Kelley had to visit the air base has been suspended, according to a defense official. Her special access gave her the ability to get onto the base simply by showing her ID.

Reports by officials familiar with the messages between Kelley and Allen give conflicting impressions about their potentially inappropriate nature.

“If they got out, John Allen would be very embarrassed by them,” said a U.S. official familiar with the e-mails but who added that there was no evidence of physical contact between the two.

Who’s who in the scandal

But a senior official close to Allen told CNN that the e-mails contained nothing pointing to sex or anything of a romantic nature.

Allen has yet to be questioned by Defense Department inspector general staff but is expected to cooperate. He has denied wrongdoing, defense officials have said.

“What I don’t want to do is try to characterize those communications,” Panetta told reporters from Bangkok, Thailand, on Thursday. “I have tremendous confidence in Gen Allen. I don’t think anybody ought to jump to conclusions.”

Read more: The Petraeus scandal: What we know

Broadwell’s anonymous e-mail, which had also been sent to a number of other officers, bore the handle “kelleypatrol — or something similar,” an official said. Allen may have received the first one as early as mid May.

The official described the e-mail as “a warning that Kelley was a seductress or something along those lines” and said it was vaguely threatening, but above all weird. “Allen did not know it was (from) Broadwell,” the official said.

That Allen remains in command in Afghanistan suggests that there is no criminal issue, a U.S. official told CNN. But the official said the Defense Department’s inspector general could still find evidence of criminal conduct.