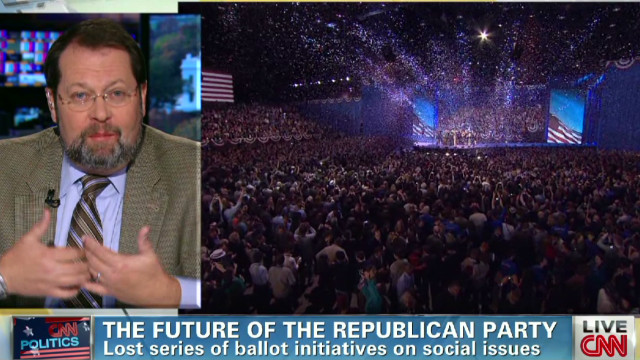 Outgoing Rep. Steve LaTourette (R-OH) opens up on why he is retiring from the House of Representatives, saying that the Republican party will not be a national party unless they “get out of people’s lives, get out of people’s bedrooms.”

Rep. LaTourette says, “… The small things that we used to be able to do in a bipartisan way, we can’t get done and that’d be the farm bill, the transportation bill. For crying out loud, we couldn’t even agree to leave town for the election…. And that lack of willingness to find common ground on the no-brainer issues really is what put me over the edge. Together with when we did put Simpson-Bowles on the floor in the spring, Jim Cooper of Tennessee and I, we got 38 votes out of 435.”

In response to the Tea Party statement that Mitt Romney was not conservative enough, he calls it “crap” and answers, “The Republican party cannot be a national party if we give up the entire East Coast of the United States…. We don’t have any Republicans in New England. We don’t have any Republicans in the Mid-Atlantic states. We can’t continue to diss the Latino voters…. We have the right message on the finances. We have to get out of people’s lives, get out of people’s bedrooms and we have to be a national party, or else we’re going to lose.”