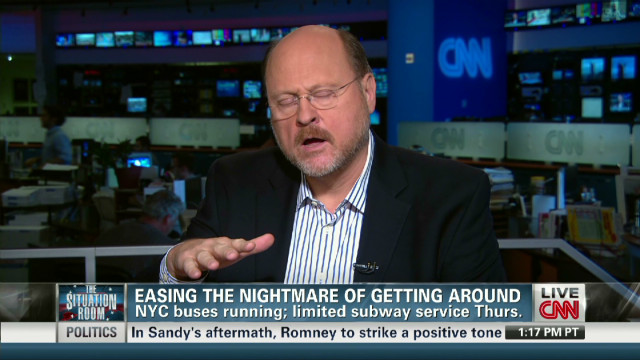 Today on CNN’s The Situation Room with Wolf Blitzer, chairman of New York’s Metropolitan Transit Authority Joe Lhota spoke with CNN’s Wolf Blitzer about the standing water in the subway system, “I’m not concerned about the water sitting there that long….And the water actually almost miraculously is crystal clear….” A highlight from the interview is below and a full transcript will be available on http://archives.cnn.com/TRANSCRIPTS/sitroom.html

Interview Highlight
THIS IS A RUSH FDCH TRANSCRIPT. THIS COPY MAY NOT BE IN ITS FINAL FORM AND MAY BE UPDATED

WOLF BLITZER, CNN ANCHOR: There’s been some concern that if the water stays in those subway stations for too long, it could cause even greater problems, mold and other dangerous situations.  How concerned are you about that?

JOE LHOTA, CHAIRMAN, METROPOLITAN TRANSIT AUTHORITY: I believe we’re going to do everything we can to get the water out before this weekend.  So I’m not concerned about the water sitting there that long.  I was there last night with Governor Cuomo.  And the water actually almost miraculously is crystal clear.  We were both commenting about how clear the water was.

So from that point of view, I’m not worried about the environmental issue.

—
BLITZER: So, if you work let’s say in below 30th Street or 35th Street, you’re not going to be able to get a subway into those parts of Manhattan.  Is that what I’m hearing?

LHOTA: That is correct.  Until they turn on the power.  We need the power from Con Ed, we call it traction power, to power up the third rail.  Without that, trains can’t move.  Lights can’t be on.  We need their power.

BLITZER:  What does Con Ed say?  When will that power come back to the lower part of Manhattan?

LHOTA:  It varies from different people from which you talk to.  It would be better if you get one of those guys onto give you an accurate statement.

BLITZER:  Yesterday, they told us it could take four days.  That was yesterday.  It might even take a week in parts of New York City.  What I’m hearing, as you’re saying that Brooklyn is slowly but surely coming back.  What about the Bronx, Queens, Staten Island?

LHOTA:  The power outages — the sustained power outage in New York City is really located in Manhattan, from Midtown, south of Wall Street, as well as in certain pockets and different areas, in Queens as well as in parts of Staten Island.  But it’s very, very limited in those areas. The large concentrated area in the Bronx is the one with the millions of millions of people living right now.

We started very, very early.  Actually, we started limited service yesterday afternoon.  Between 3:00 and 5:00 and we’ve got the complement of buses out there right now, both local buses as well as express buses that come in from the farther reaches of the city.

The city is crowded.  I’m sure you’ve seen the traffic problems we’re having here.  The mayor is dealing with that with his announcement.  But I will tell you — I mean, people are gratified that the service is up.  I will tell you and I would like to tell my customers here in New York that we are going to come back in increments.

We’re going to do the limited service tomorrow for travel tomorrow.  There will be more the following day and more the next day and more after that.  We want to bring as much back as we possibly can.