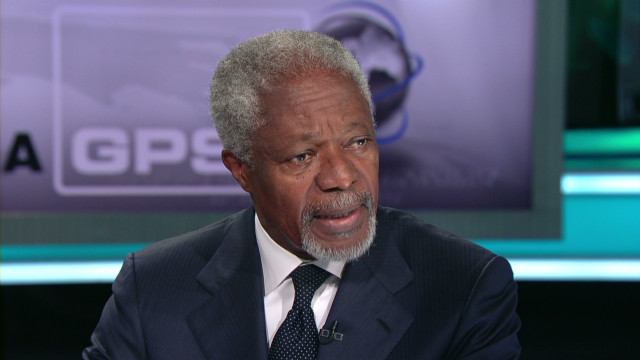 ZAKARIA: Do you think military intervention could work here?

ANNAN: I am dead certain it will not work. It will make the situation much worse.

ANNAN: First of all, Libya — people refer to Libya as an example. Syria is not Libya. Syria is located in one of the most volatile regions of the world. Syria is next to Iraq, next to Lebanon, where we have major problems. And in a region where you have all sorts of jihadist elements. And, as we know, they have been crossing into Syria. And because of the nature of the Syrian society, which is a mosaic — I mean people talk about Syria as if it’s Shia and Sunni alone. You have the Shia and Sunni, yes. They are the vast majority. But you also have the Christians, the Druze, the Assyrians, the Turks, the Turkmens, and the Ismailia. Where do they turn to? These are people who may neither be with the government nor the rebels.

ZAKARIA: But, you know, people look at the violence and they say — “The Economist” magazine this week has come out in favor of intervention. But they’re not clear what that means. They say, we should do something. That isn’t the feeling of a lot of people.

ANNAN: Yes, that is the feeling of lots of people and it’s been, also, the feeling of a certain group from the beginning. I mean that is the group that, for example, propagated the idea that any attempt to mediate gives Assad more time to kill. I mean I’ve never heard of anything of the sort. It is a piece of unmitigated nonsense, in effect, saying don’t even try to resolve it peacefully, don’t give the Syrians hope, give weapons and let’s kill each other.

ZAKARIA: You know who — who said that? At the vice presidential debate, Paul Ryan named you and he said the administration put their faith in Kofi Annan and that was the problem.

ANNAN: No. And he was dead wrong. He was dead wrong. Honestly, this is one of the first situations where I’ve seen people claim that attempt to mediate complicates or allows more killing to go on. And in almost every situation, we try to find a peaceful solution. If it works, well and good. You save people. Now, you have Syrians who are living through incredible traumas. And they are the ones we should be crying for, not making statements of don’t attempt to resolve it peacefully. If they were to go in with a military intervention — and by the way, I don’t sense any agency of countries wanting to rush in and intervene. Yes, some are sending in weapons. But that is quite different from the kind of intervention. But sometimes by making these statements and raising the hope of the people that the cavalry is on the horizon. You complicate the situation and really — and create the fighting and the killing to go on. And if it’s not going to come, one should look at other solutions.