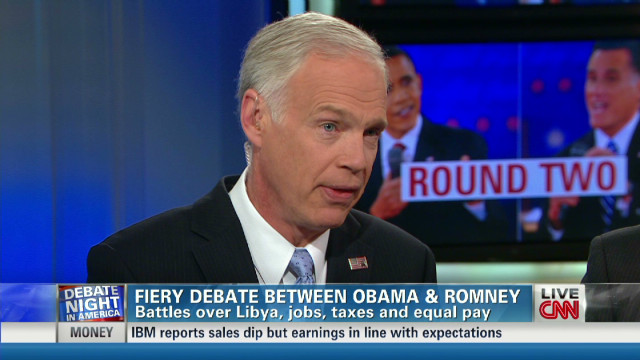 Sen. Johnson: Economy was not in free fall when Pres. Obama took office

CNN Anchor Soledad O’Brien and the Starting Point panel discuss the presidential debate and records of the candidates with Senator Ron Johnson (R-WI).

Senator Johnson says, “The reason we’re not creating those jobs is because of the choices, the policies, that President Obama took. You know, because here is the fact: he did not come into office with the economy in a free fall. We were losing jobs, but the fact is, within two months, we entered the second quarter, we only lost 0.7 percent GDP. But the economy bottomed out and then we started recovery the third quarter.”

O’Brien asks, “You don’t think the economy was in free fall then?”

Sen. Johnson answers, “No. The economy began to recover in the third quarter. It’d basically flattened out by the second quarter and it actually grew close to 4 percent the next three quarters. But then President Obama’s policies took effect and they started scaring consumers and business owners and as a result the economy totally stalled.”

Starting Point with Soledad O’Brien airs weekday morning from 7-9am ET on CNN.