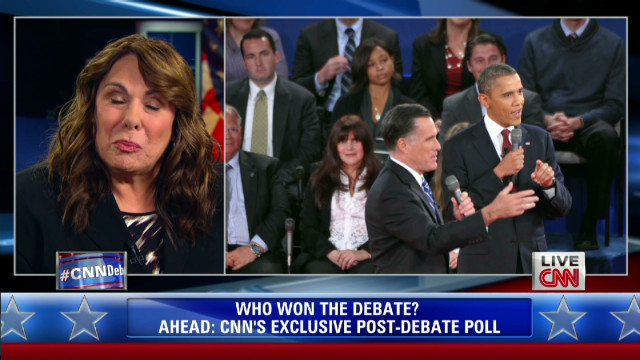 CNN chief political correspondent Candy Crowley talks about moderating the second presidential debate between President Barack Obama and Republican presidential nominee Mitt Romney. A highlight from the first portion of Candy’s conversation on CNN is after the jump.Transcript
THIS IS A RUSH TRANSCRIPT. THIS COPY MAY NOT BE IN ITS FINAL FORM AND MAY BE UPDATED.

WOLF BLITZER, CNN ANCHOR:  I want to go to Soledad O’Brien, she’s standing by right with a very special guest.  Our own Candy Crowley.

Before you say a word, I want to say, Candy, job well done.

SOLEDAD O’BRIEN, CNN ANCHOR:  Absolutely.  I’ll second that.  You know, it’s interesting, we’re waiting to hear what the polls have to say about who won or who lost this debate.

But, Candy, I’m curious from your perspective, it felt from here very contentious, not just between the two men who are on the stage, but also sometimes they were turning on you, and trying to over-talk you, and at one point, I think it was Governor Romney who said no, when you — you made some point.

And how did it feel from your vantage point?

CANDY CROWLEY, CNN CHIEF POLITICAL CORRESPONDENT:  I actually didn’t.  I knew the — there is so much at stake, there’s so little time.  I expected them actually to come at me when I tried to kind of rein them in, and also you don’t want to be — when they’re going, I don’t want to have some, you know, sort of — here’s an artificial, you all need to be quiet right now, so there’s this kind of balance you’re trying to strike, and they just want to get in everything that they’ve ever known that even possibly has to do with the subject.

So I didn’t take it personally or anything, I just took it — and I don’t think they even meant it personally, but when they first started and it was an energy question, who knew?  I thought they —

CROWLEY:  I thought maybe tax — just something, but boy, and I just thought, you know — and we were so over by the — I mean over time, but they were so good sort of being in each other’s face, and saying no, that’s not true.  And I thought, well, that’s a debate.  So here we go.  So it didn’t — I didn’t take it personally at all, and I thought the first part of it especially was fun to watch, and hopefully enlightening to people.

O’BRIEN:  Very, very interesting, I though.  You told everybody at the beginning there’s no clapping, turn off your BlackBerrys, turn off your cell phones.  There was a moment when people clapped.  Actually sort of two moments under the same question, which is about Libya.  They were just talking about it, Wolf and Anderson, just a moment ago.  And it was when the president said that he stood in the Rose Garden and said this was an act of terror, and the actually quote that he said on that day, the day after the act was, “no acts of terror will ever shake the resolve of this great nation,” and went on from there.

In a way you had to fact-check on both sides.

CROWLEY:  Right.  Well, I knew that the president has said act of terror, because this has kind of come up before, and also I heard him that day.  And what Mitt Romney was going for, and I think where he tripped himself up was that he picked that one wrong fact.  The president did call it or refer to it in some ways an act of terror, and so it felt as though — and the president kept looking at me going, you know, and I thought, well, I did know then, I said, you know, he did call it an act of terror.  That’s what caused the applause.

O’BRIEN:  But then this side over here —

CROWLEY:  Right.  On this side over here, which is clearly the —

O’BRIEN:  Then you fact-checked again.

CROWLEY:  And then I said, but you are correct that they didn’t know for a couple of weeks that it wasn’t related to the tape and there was no riot outside the consulate, so — and that side of the room clapped.

CROWLEY:  I wasn’t trying to get them to clap, I was trying to sort of — you know, bring some kind of clarity to the conversation.

O’BRIEN:  We should mention, behind us, they are beginning to clear the stage back here a little bit.

O’BRIEN:  You can barely pry them apart obviously because they would love to have every of those — every one of those.  So Wolf wants to jump and ask a question, Candy.

BLITZER:  Yes, Candy, what was your — the biggest surprise for you during the course of this debate?

CROWLEY:  Probably how easily you could go — you know, on the Sunday show, I like having a little time.  And I said, 7 1/2 minutes to discuss immigration, that seemed like an OK amount of time, but we wanted to get to guns, and we wanted to get to, you know, so many things we didn’t have a chance to get to.

But it goes so quickly, even when they’re kind of within their time constraints.  So — and somebody told me before I went in, this will be over before you know it.  And it just was amazing to me how I looked up and I thought I’ve got five things I want to ask all of them.  So you have to make that choice, do I ask them that or do we try to get in all of these questions?  You know, and I tried to opt mostly for getting in all these questions.  So I just think that the time flies thing really did take me by surprise.

O’BRIEN:  I know Anderson has a question as well for you, Candy.

COOPER:  Yes, Candy, just as a moderator, you often catch things that, you know, the cameras are trained on both these men the full time, the kind of the electricity of being on the stage.  The level of personal animosity, was it palpable?  Did it — did it feel like there was personal animosity between these two?

CROWLEY:  You know, I know it — as you know, the camera kind of enlarges things, but I have to say, sitting on that stage, I didn’t feel like it was personal animosity.  I felt like the calendar was closing in on these guys.  Remember the next debate is all about foreign policy, so they knew this was their last kind of chance to do it.  So I thought they were both incredibly intense, they both came to play, but I didn’t totally get this kind of “we hate each other” vibe from them at all.  I just got an urgency vibe from the both of them.

DANA BASH, CNN SENIOR CONGRESSIONAL CORRESPONDENT:  And, you know, Candy, I know normally when you are not moderating a debate, you’re watching the social media feeds, you’re watching Twitter.  And I will tell what was going on, particularly on the Libya question is conservatives were saying Libya, Libya, Libya, please, because they thought that was the best moment, possible moment for Romney to really take a whack at the president.

And he didn’t seem to.  He really seemed to — it really seemed to be one of those moments that conservatives were disappointed in Mitt Romney.  But that sort of leads me to my question, which is, you called through all of these questions that this — undeclared voters brought in this morning.  I know that this was such a big concern of yours.  How do you decide which ones to choose?

CROWLEY:  It’s funny, because it was not one thing that decided everything.  It was kind of a multitude of things.  We wanted to cover subjects that may be folks hadn’t heard about but still were interested in and I think —

CROWLEY:  Gun control and immigration and women’s issues were the three big ones.  Climate change, I had that question.  All you climate change people.  We just — you know, again, we knew that the economy was still the main thing, so you knew you kind of wanted to go with the economy, maybe the gas prices again was something that hadn’t come up.  So — that was part of it.  Part of it was kind of a variety of questions that were important but had not yet been kind of fully aired at least in this large of a forum.

The next question, you know, was to make sure that we had some variety in, we didn’t want all white guys or all white women, or — you know, we tried to get some kind of — with what we were given, some kind of variety in the questions.  And we also were, you know, thinking of where are they going to go with this that’s new.