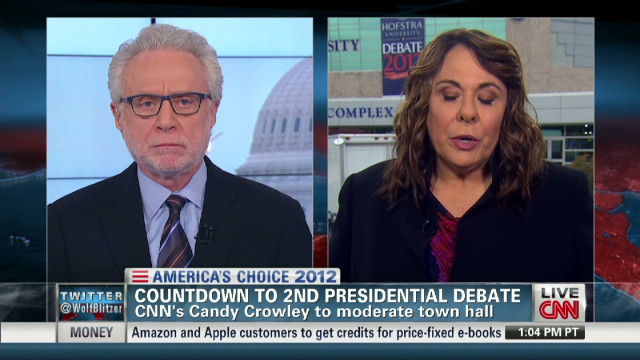 Today on CNN’s The Situation Room with Wolf Blitzer, Candy Crowley, CNN’s chief political correspondent and anchor who will moderate Tuesday’s town hall debate at Hofstra University, joined Blitzer to discuss the format of the second presidential debate and how she is preparing. A transcript from the interview is after the jump.

WOLF BLITZER, CNN:  The moderator of tomorrow night’s huge debate is our own chief political correspondent, Candy Crowley.  She’s the host of CNN’s “STATE OF THE UNION.”
Candy, I want to first get to what President Obama, you believe, needs to do tomorrow night to prevent a repeat of his first presidential debate.

CANDY CROWLEY, CNN CHIEF POLITICAL CORRESPONDENT:  I think the criticisms that you have heard both from Democrats and Republicans of President Obama’s first appearance was that he didn’t seem into it, frankly, that there wasn’t any passion there.  There was a listlessness there, kind of a disconnection.

And people thought, boy, and even Democrats were saying, gee, does he really want this job?  So there has to be passion there.  There has to be a real vigorous standing up for what he believes in.

Having said that, I think Jim is exactly right what he said in his spot, is that this is a town hall meeting.  You are not that far from folks that asking you questions.  And let’s remember that President Obama is not Joe Biden.  He’s not as hot, if you will, on camera, not as passionate.

So you — this still has to be President Obama.  And he still has to show passion, but he can’t go over the top.  So I think that’s what they’re looking for.  I mean, that’s certainly what we’re hearing in the folks around President Obama talking about what they think we will see tomorrow night.

BLITZER:  All right.  As you know, Candy, there’s a little dust-up going on today.  The campaigns, both the campaigns agreeing on one thing.  They’re saying that they expect the questions to come only from the audience.  What exactly is the format of tomorrow night’s debate?

CROWLEY:  It’s a town hall meeting.  There will be questioners to the right and left of me and in front of the candidates.  And they will have the questions.  And as was the case in the Charlie Gibson town hall meeting and the Tom Brokaw town hall meeting in presidential campaigns past, there is a time after that for follow-up and for furthering the discussion.

BLITZER:  Facilitating the conversation, as it were.  So how are you preparing for this…

CROWLEY:  Whatever you want to call it, yes.

BLITZER:  How are you preparing?

First of all, I will try to get a good night’s sleep because it’s a very long day because we get the questions tomorrow morning from the town hall folks.  Remember there’s I think between 80 and 100 of them coming.  So not everyone’s going to get to ask a question.  We have to cull through those and figure it out.

But more than that, Wolf, as you know, it’s like preparing almost for any interview, except for on a bigger stage and with so many issues.  I’m trying to just know what the facts are, what the positions are, so that when something comes up that maybe could use a little further explanation, it might be as simple as, but the question, sir, was oranges and you said apples.  Could you answer oranges?  Or it might be as simple as, but, gee, how does that fit with the following thing?

So you try to know and study up on as much as there is out there, knowing that hopefully you’re getting close to, you know, 90 percent of the knowledge you need, knowing that you’re only going to use 1 percent.  But you don’t know which 1 percent you’re going to need.

BLITZER:  And you make the decision, Candy, correct me if I’m wrong, which questions, which people will be allowed to stand up and ask these two candidates a question.

It’s more — it’s less about which people as it is about which question.  Certainly, we expect that a lot of these folks will bring in the same question, but you want to have a variety, you want to try to cull some new ground out there, and you want to really get a reflection of what these people want to know about, as well as what is out there for folks that haven’t quite figured it out yet, like, what are their questions remaining?  You want it to be reflective of that.

So, yes, I have a small team of folks that are going to help me.  We’re the only ones that know what the totality of the questions and we’re going to try to figure out as broad of a range we can get to tomorrow night.

BLITZER:  I have no doubt you will do an excellent, excellent job, Candy.  Good luck and we’re all with you obviously 100 percent of the way.  Appreciate it very much.