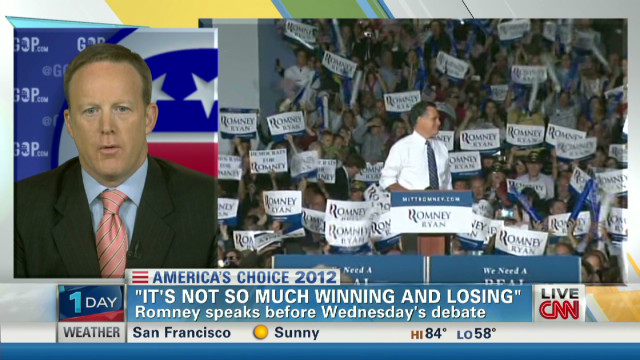 Spicer says, “The folks from the Obama campaign have talked down the expectations from the President so many days in a row that today I expect them to come out and say that the President’s got a fear of public speaking. I mean these guys keep talking it down like it’s going to be a blow away.”

He continues, “The President is the only one who’s actually been through a presidential debate. By all accounts, I think the one thing that Republicans and Democrats can agree upon is the President is a gifted speaker. He has amazing rhetoric. He can go out there and wow a crowd. That is his strength. I will give him that. But I think there’s a big difference between going out over and over again and making promises and having great rhetoric and then having a record to follow up on. And that’s where you’re going to see the contrast tomorrow night. Governor Romney is going to be able to lay out very succinctly where he wants to take the country and his plans and policies. I think the President’s going to be talking about blame and excuses as to why he wasn’t able to get things done even though he had a Democratic Congress for two years of his presidency.”

On the gender gap in polls, “I can tell you that Governor Romney’s plan is one that addresses how to make this country better for all Americans that deals with issues that women care about in terms of insuring that we have better health care so that our families and our kids can get better. That we have fewer regulations because so many women are running small businesses today. So, it is a campaign that is focused on all Americans.”

Starting Point with Soledad O’Brien airs weekday morning from 7-9am ET on CNN.