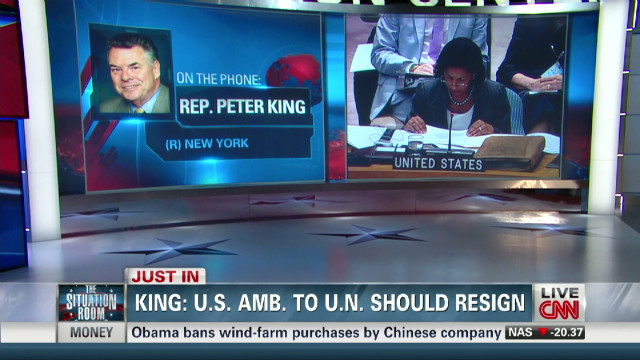 Today on CNN’s The Situation Room with Wolf Blitzer, chairman of the House Homeland Security Committee Rep. Peter King (R- NY) called for the resignation of The United States ambassador to the United Nations Susan Rice. “I believe that this was such a failure of foreign policy message and leadership, such a misstatement of facts as were known  at the time and for her to go on all of those shows and to in effect be our spokesman for the world and be misinforming the American people and our allies and countries around the world, to me somebody has to pay the price for this….I can see why if they wanted to say it’s too early to say it’s definitively terrorism but to rule out terrorism, to say it was not terrorism at that time was a — to me a terrible mistake to make whether it was done intentionally or unintentionally and to show the significance of that, I believe she should resign, yes.”

Earlier on the program, CNN national security contributor Fran Townsend reported on the state of the investigation into the Libya attack, “Wolf.  And so you’ve got a — a handful, you’ve got some FBI agents in Tripoli waiting to deploy out to Benghazi.  You’ve got dozens of other FBI agents in countries, in third countries, waiting visas to get into Libya to be able to go to Benghazi. I — I will tell you, Wolf, talking to law enforcement officials as recently as this afternoon, you know, it’s been — today is day 18 since the attack.  And the point was made to me, we may not even go now.”

A full transcrip will be posted on http://archives.cnn.com/TRANSCRIPTS/sitroom.html