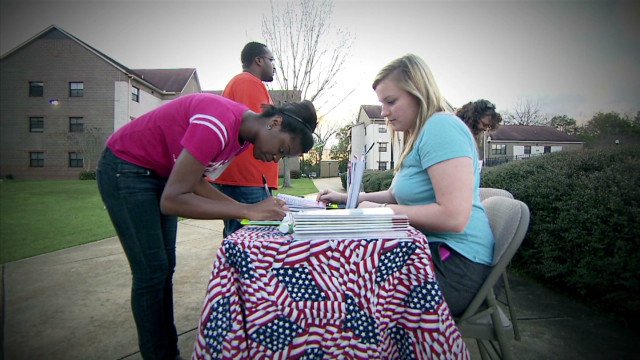 CNN senior correspondent Joe Johns investigates the impact of tough new voter laws in Voters in America: Who Counts on Sunday, Oct. 14.  The one-hour documentary focuses on new legislative voting changes in the battleground state of Florida and how those changes may affect the outcome of the 2012 presidential election.

House Bill 1355 makes 80 changes to Florida’s election laws and its sponsors say its intent is to reduce voter fraud.  Among the most controversial changes was a recently struck down provision that established a 48-hour limit for community groups to turn in their completed applications on behalf of new voters.  Organizations such as the League of Women Voters (LWV) and the NAACP objected to many of the new changes, including this specific restriction, pointing out the challenge it created for filing registrations obtained over weekends.

Deidre Macnab, president of Florida’s LWV, says the consequence of the new registration form filing deadline, which includes the risk for a $5,000 fine and potential felony prison penalty for false registration, forced her organization to stop registering voters in the state.

The new law also does away with one of two Sundays during the early voting period.  Minority voting activists say 2008 election data revealed that both early voting and weekend voter registration drives were popular among minorities and students.  LaVon Bracy, a long-time Orange County Florida voter registration activist, says she feels sponsors of the law intend “to suppress the minority vote.” CNN Contributor, Roland Martin agrees with Bracy’s analysis.

H.B. 1355 passed in April 2011 with a party line vote of 77 to 38 in the Florida House of Representatives.  The bill was signed into law by Gov. Rick Scott (R) in May of last year.  State representative Dennis Baxley (R-Ocala), chief sponsor of the H.B. 1355 legislation, rejects the notion that he is trying to suppress the votes of African Americans and Latinos, and he disagrees that the intent of the new law is anything more than his effort to prevent voter fraud.

“One of the things, I think, that was really going wrong was the opportunity for local elections to be displaced or stolen, by just people coming in and moving their address,” Baxley says in the documentary.

Johns’ investigation reveals there were 55 cases of voter fraud referred for prosecution by the Florida Secretary of State out of 11,600,000 registered voters over five years, the latest period for which data is available.

“It’s true that there is some voter fraud in this country…but there is no credible evidence that there is any systematic in-person voter fraud.  It’s not a serious problem,” says Prof. Richard Hasen of the Univ. of Calif.-Irvine.

In Florida, at least one high-profile Republican agrees with the law’s opponents.  Jim Greer, former Florida GOP chairman, tells Johns that the state’s new voting law was developed during a series of meetings following the high minority turnout in the 2008 presidential election.  He claims party members openly expressed concern that future elections could only be won if poll access changes were made.  Both Greer’s successor as party chairman and Baxley disagree with Greer’s accusations, and Greer is both currently under investigation for the mismanagement of state party funds, which he denies, and he’s suing the state party for back pay.

Since it became law, the H.B. 1355 has attracted attention well beyond Florida.  Protest demonstrations in New York City, Atlanta, and Washington, DC, have referenced Florida’s law.  And, U.S. Senator Dick Durbin (D-IL) described the bill as creating “an undue hardship on minority voters in the State of Florida, in addition to the elderly, poor, and rural voters.”

More than a dozen states, most with Republican governors and legislatures, enacted tough voter laws since the last national election.  Kansas Secretary of State Kris Kobach (R), a national advocate of using voter ID laws to prevent voter fraud says in the documentary: “We do want it to be easy to vote, but want it to be hard to cheat, too.”

Users can find continuing coverage on the demographic issues and new voting laws impacting the 2012 election, including opinion editorials and articles on the issues covered in the Voters in America specials, at www.cnn.com/inamerica.  For breaking political news and campaign developments, users can follow CNN’s Political Ticker via Twitter and visit CNNPolitics for additional content.

Robert Ruff and Michelle Rozsa are the senior producers for Who Counts.  Kimberly Arp-Babbit is the producer.  Bud Bultman and Geraldine Moriba executive produced this edition of Voters in America for CNN.