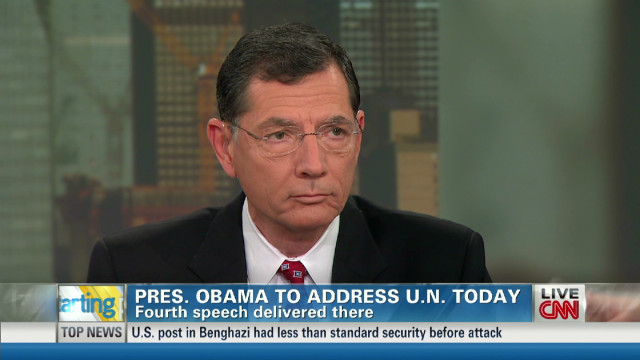 Barrasso says, “[President Obama] says Osama bin Laden is dead and al-Qaeda is on the run. Al-Qaeda’s not on the run. What we’ve seen is al-Qaeda targeted and assassinated our ambassador in Libya. That’s the case. And then he called that a bump in the road. These are four dead American bodies who are in the road. So, I think he is absolutely wrong there. When he talks about pulling out of Iraq. What we now know is that his military advisors said leave people in Iraq, 15,000. He wasn’t able to accomplish that. So right now Iran is flying supplies to Syria over Iraqi airspace. It shouldn’t be happening, but it’s being done to supply the Syrians who are massacring their people. This president has failed on foreign policy.”

He adds, “The reset button on Russia has failed, we are still being held hostage by that. We know that China is funneling money to Iran in spite of all the sanctions we have. And I think the President, additionally, with regard to Israel needs to say exactly where the red line is, where the deadline is. And what it really means so people in Israel and the United States and Iran know when the President says ‘we have your back,’ what specifically does that mean.”

LaBott says, “I think on the issue of Iran, I mean, what US officials tell me is why should we spell out exactly what Iran needs to do. Want to keep Iran kind of guessing a little bit. Certainly, it’s coming to crunch time. I think it’s not so important necessarily that the President spells out to the general pubic and to the Iranians what he needs to do. He needs to spell out privately to Prime Minister Netanyahu, ‘this is where I’m prepared.’”

“Thirteen meetings with foreign leaders last year, none this year,” Barrasso says. “But time for ‘The View.’ I think that it misses the mark in terms of where the United States ought to be in foreign policy.”