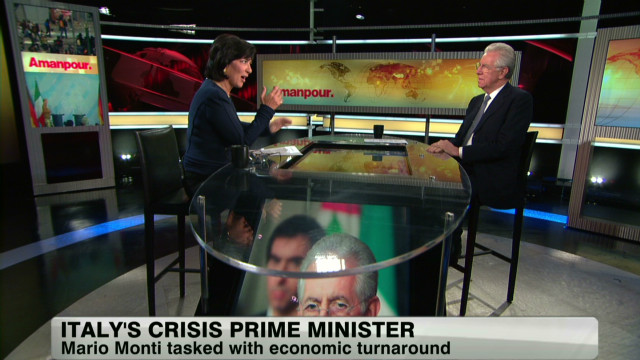 Italian Prime Minister #Monti to #Amanpour: “No, I will not run for the elections.”

CNN’s Christiane Amanpour interviewed Italian Prime Minister Mario Monti about his nation’s economic austerity, whether he will stand for national election in Italy, and his relationships with his predecessor, Silvio Berlusconi, and Germany’s Chancellor, Angela Merkel:

AMANPOUR:  Well, let me ask you, because obviously you were the unelected prime minister.  There are elections coming up.  Will you run?  Will you enter the race for the  leadership?

MONTI:  No, I will not run for the elections.  By the way, I don’t need to, because the president of the republic appointed me senator for life.  And I think it’s important that the full political game resumes in Italy, hopefully with a higher degree of responsibility and of maturity.  We are helping that by being part of the European Union.  Obviously, I will facilitate as much as I can the evolution.