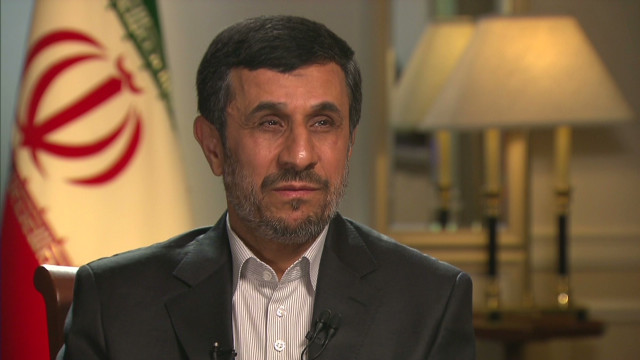 In an interview airing Monday at 9 p.m. ET/PT on Piers Morgan Tonight, Iranian President Mahmoud Ahmadinejad discussed a wide-range of topics with host Piers Morgan including, the assassination of Ambassador Stevens and anti-American violence in the Middle East; Israel and a potential strike on Iran; and his views on homosexuality.

PIERS: The big catalyst for protests at the moment in the Middle East was the video that was released which mocked the Prophet Mohammed. As a result there was an attack as you know on the American Embassy in Benghazi in Libya, the Ambassador Christopher Stevens was murdered. Do you condemn the attack which caused his murder?

AHMADINEJAD: Fundamentally, first of all, any action that is provocative, offends the religious thoughts and feelings of any people, we condemn. Likewise, we condemn any type of extremism. Of course, what took place was ugly. Offending the Holy Prophet is quite ugly. This has very little or nothing to do with freedom and freedom of speech. This is the weakness of and the abuse of freedom, and in many places it is a crime. It shouldn’t take place and I do hope the day will come in which politicians will not seek to offend those whom others hold holy, or sanctity. But we also believe that this must also be resolved in a humane atmosphere, in a participatory environment and we do not like anyone losing their lives or being killed for any reason anywhere in the world.

PIERS: There are protestors all over the Middle East now threatening the staff of American embassies, threatening to kill them, to behead them. Do you think they should stop?

AHMADINEJAD: You see, I cannot determine what people or nations should do, but I do think that extreme, extremism gives birth to following and subsequent extremists. Perhaps if the politicians take a better position in the West vis-a-vis offensive words or thoughts or pictures towards what we hold holy, I think conditions will improve.

MORGAN: If Israel does launch a strike against your country, what will your response be?

AHMADINEJAD: The response of Iran is quite clear, I don’t even need to explain that; any question in any nation has the right and will indeed defend herself. But my question is this, why should the world be managed in such a way that an individual can allow himself to threaten a rich and deeply-rooted historical, ancient country, such as Iran. A great country, such as Iran, based on an excuse of his own fabrication. So anyone can do this. Another country can say, I am guessing that country B is doing activity X, therefore I will attack that country. Can this be.a successful formula for the management of the world?

MORGAN:  Do you fear that war is imminent; do you fear that there will be military conflict, perhaps before the end of this year, between your country and Israel?

AHMADINEJAD: Of course the Zionists are very much, very adventuresome, very much seeking to fabricate things and I think they see themselves at the end of the line and I do firmly believe that they seek to create new opportunities for themselves and their adventurous behaviors.

MORGAN: Shouldn’t freedom and individuality and all those things also extend to people who just happen to be gay? Who were born gay. They weren’t made gay. Wouldn’t it be great for the President of Iran to say you know something, everyone’s entitled to be whatever sexuality they are born to be? That would be a great symbol of freedom.

AHMADINEJAD:  Do you really believe that someone is born homosexual?

MORGAN: Yes. I absolutely believe that. Yes, I do.

AHMADINEJAD:  I’m sorry. Let me ask you this. Do you believe that anyone is giving birth through homosexuality? Homosexuality ceases procreation. Who has said that if you like or believe in doing something ugly, and others do not accept your behavior, they’re denying your freedom?

MORGAN: You are a father —

AHMADINEJAD:  Perhaps in a country —

AHMADINEJAD:  — they wish, they wish to legitimize stealing.

MORGAN: You are a father of three children.

AHMADINEJAD:  A few percentage of the —

MORGAN: You have two sons and a daughter, what would you do if one of them was gay?

AHMADINEJAD:  These things have different ways. The proper education must be given, proper– the education system must be revamped.  The political system must be revamped. And these must be also be reformed, revamped along the way. But if you, if a group recognizes an ugly behavior or ugly deed as legitimate, you must not expect other countries or other groups to give it the same recognition.