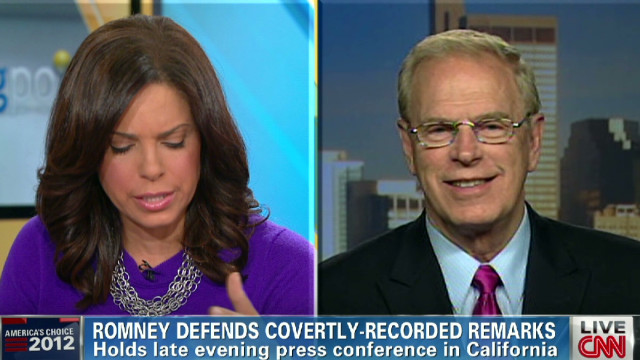 Pres. Obama rep. on Romney leak: “It was a deep chasm”

Strickland says, “Well, it wasn’t a bump in the road, it was a deep chasm, in my judgment. And quite frankly, what the Governor said is very significant because it reveals something about his value system. For him to speak with such disdain about so many Americans and he wants to be our President? Some of those people that he was talking about, Soledad, are soldiers that are risking their lives at this very moment in Afghanistan. Some of those people he was talking about in such a disdainful way are older people. ow can this man who wants to be president talk in such a disdainful way about half of the American people, and then hope to pull this country together and to be our president.”

He continues, “He’s very sly…. Many people don’t pay income taxes because they’re so poor they don’t make enough money to be able to pay income taxes. But they pay payroll taxes, they pay state taxes, they pay excise taxes. This man apparently feels that if you’re not a part of his social class or you don’t have his economic status, that somehow you’re a parasite.”