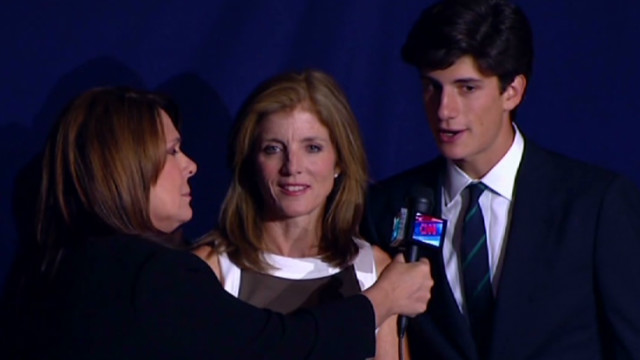 Caroline Kennedy and her son, talk with CNN’s Candy Crowley

CNN’s chief political correspondent and anchor Candy Crowley interviewed Caroline Kennedy and her son, Jack Schlossberg today on the floor of the DNC convention about President Obama, the legacy of late-Senator Kennedy and about the possibility of another Kennedy in office.

CANDY CROWLEY, CNN ANCHOR:  I think it’s Jack’s first appearance on our air, so thank you for joining us.  And why don’t I start with you, because I know you were — your mom said at the time she endorsed President Obama four years ago, that you were part of her inspiration for that.  What drew you to Barack Obama?

JACK SCHLOSSBERG, CAROLINE KENNEDY’S SON:  Well in 2008, everyone was so excited, and it was great to be able to talk to my mom and my uncle Teddy and my sisters, and sort of talk about politics over three generations.  And I was really inspired, as my mom just said, about the promise Senator Obama made to us.  And now I’m really inspired by what he’s done so far.  And, yes, that’s the main reason.

CAROLINE KENNEDY, DAUGHTER OF JOHN F. KENNEDY:  I don’t think — you know, it’s been a tough four years economically.  People have had a really hard time.  And I think now we’re really going to see, though, that people are really deeply committed to President Obama, especially young people.  Because I think when they sit down and think about it, they know that he’s the one with the plan for the future, for their future.   I think that’s going to change.  I think those polls are going to change.

CROWLEY:  It’s going to be hard to make up — there’s like about a 20-point gap between those who say that they’re definitely going to vote, and then young people, who say they’re definitely going to vote this time around.  I know you’ve written a couple of articles for our dot-com.  What is your best pitch there?  I think we heard your mom’s out here in her speech that we carried.  But why do you think it is?  A lot of people think it is the unemployment rate among young folks, 18 to 24, is about 17 percent.

SCHLOSSBERG:  Well, I think that young people have a lot to thank President Obama for, actually.  I think that he’s been an incredible ally to us in Washington, whether it’s pushing for the DREAM Act, whether it’s, you know, coming out in support of gay marriage, an issue that’s very important to my generation, or — and the Affordable Care Act.  All of us are able to stay on our parent’s plan until we’re 26, and that’s a really big deal, and I think that a lot of people are going to start getting excited now.  We’re really starting to kick this off.  And I think you’re going to see a lot of young people at the polls.

CROWLEY:  It’s interesting, you’re saying the social issues in some way sort of drive out the young vote.  Let me ask you, and I’ll start with you, would you like Jack to have a career in politics?

KENNEDY:  Well, Jack’s great, and I know whatever he does, he’ll do it with all his heart, so whatever that is, I would be fully behind it.

CROWLEY:  So mom wouldn’t stand in the way?

KENNEDY:  Well, he’s got to finish college, so you know, so why don’t we come back and talk about that later.

CROWLEY:  OK, let me try with Jack then here.  So you’re a sophomore at Yale.  And I should ask you what’s wrong with Harvard, but OK.  Would you think about running for office?  Does politics interest you?

SCHLOSSBERG:  Politics definitely interests me.  I’m most interested in public service.  I think that’s something that I got from being part of my family, which is such an honor.  I haven’t even picked what classes I’m taking this semester yet, so I’m not thinking about a political career right now.

CROWLEY:  Thinking about getting through Yale, right?

CROWLEY:  OK.  And I just have to ask you about the tribute to Uncle Teddy, your great-uncle and your godfather.

CROWLEY:  Right.  Any dry eyes in the room you were in?

KENNEDY:  No, that was so wonderful.  I don’t know, it was just great to feel his presence here, and I think everybody shared that feeling.

SCHLOSSBERG:  Teddy showed up for every, you know, first communion, Thanksgiving, everything, and it was so typical for him to show up one last time here again, which is great.

CROWLEY:  Jack Schlossberg and his mom, Caroline Kennedy, thanks for spending some time with us.  Back to you, Anderson.

KENNEDY:  Can’t wait to see you on the debates.

CROWLEY:  Oh, thanks.  Thanks.