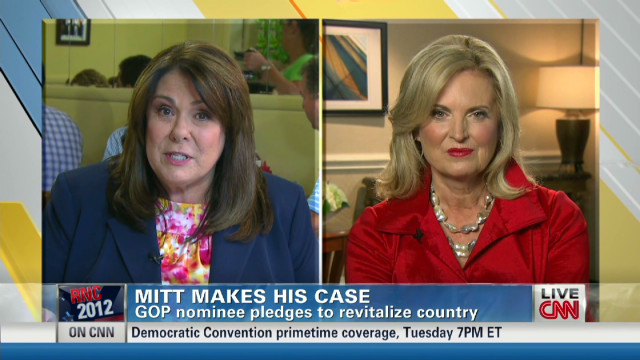 Ann Romney: I hear that women want a “grown up” as President

On Starting Point, Ann Romney reacts to Mitt Romney’s speech accepting the Republican nomination for President and gives her thoughts on what women voters are looking for in the next President.

Ann Romney tells CNN’s Candy Crowley, “I will tell you what I’m hearing from women across the country right now. Those that may not have voted for a Republican in the past are coming up and telling me this. That enough is enough. That they care not about their own job, and their children’s job and their husband’s job, which they do care about because they’re worried about those. They are also caring about the legacy of debt that we’re leaving their children. I think they recognize that it’s time for someone that understands the economy, understands job creation, understands how responsible he’s going to be in making sure that their children are not going to be burdened with the debts.”

She continues, “And I’m hearing from so many women that may not have considered voting for a Republican before that said it’s time for the grown up to come. The man that’s going to take this very seriously. And take the future of our children very, very seriously. I very much believe it’s going to be an economic election. And I think a lot of women may be voting this cycle around in a different way than they usually are. And that is thinking about the economy. Thinking about their own jobs, their husbands jobs, but also thinking about the future.”