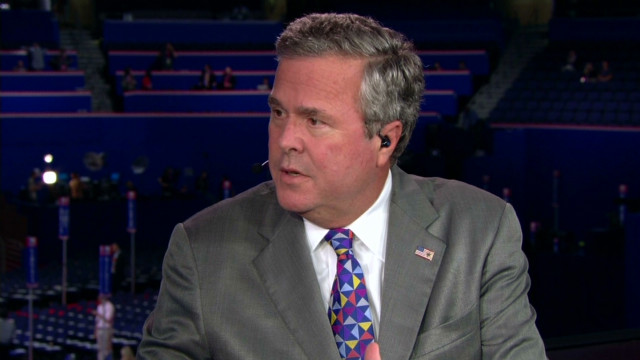 Jeb Bush on deportation: I think there’s a better way of saying we need to control the border.

Former Gov. Jeb Bush spoke with CNN’s Wolf Blitzer about immigration and more. Bush told Blitzer, “Finding a permanent solution to the DREAM Act, qualified people, is definitely the responsibility of the next president.”  A highlight from the interview is after the jump and a full transcript will be posted on http://archives.cnn.com/TRANSCRIPTS/2012.08.29.html. This interview aired today on CNN’s The Situation Room with Wolf Blitzer in the 4 p.m. ET hour.

Highlight from the Interview

THIS IS A RUSH FDCH TRANSCRIPT. THIS COPY MAY NOT BE IN ITS FINAL FORM AND MAY BE UPDATED
WOLF BLITZER, CNN HOST: I know you don’t want to talk about that right now.  You were quoted as saying Republicans are “acting stupid” direct quote, “acting stupid” when it comes to trying to attract Latino voters, which is a hugely growing segment of our population.  What did you mean by that?

JEB BUSH, FORMER GOVERNOR OF FLORIDA: Well, it’s pretty clear what I meant.  But I meant it over the long haul, which is what I said, that over the long haul as we change demographically as a country and seeing that Latino becomes a bigger and bigger part of the scene and operation, you’re going to have the need to change the tone on many issues —

BLITZER: So what should they be doing, your fellow Republicans?

BUSH: I think the focus ought to be on aspirational messages that are more hopeful and optimistic.  Economic growth over a sustained period of time.  Building capacity for people, particularly the newly arrived, so they can make a contribution to our country.  Get the border control issues correct.  But let’s move beyond that to create sustained economic growth for a majority of people.

BLITZER: Support something like the DREAM Act, is that something Republicans should be doing?

BUSH: Immigration is a gateway basically.  It’s a check-off point for Latino voters.  They want to hear about these bigger, broader issues.  Finding a permanent solution to the DREAM Act, qualified people, is definitely the responsibility of the next president.  This president has had a chance to do it. He did it by executive order for purely political purposes, but he’s not brought comprehensive immigration reform to the forefront, even though he promised it and he had a majority for the first two years.

So, yes, those are issues that need to be dealt with.  But I think from a political point of view, across the country over the long haul, Republicans need to be more respectful of voters that are trying to attract.

BLITZER: In this last poll we had the CNN/ORC poll, Latino choice for president, President Obama, 68 percent, Mitt Romney 27 percent.  That’s a huge gap.  That’s only going to grow – I mean, when Romney spoke about self-deportation, how badly did that hurt him?  You’re familiar, you speak Spanish. You know the Latino community.

BUSH: So, it gets to the question of tone, again.  I think there’s a better way of saying we need to control the border.  Great countries need to secure their border for national security purposes, for economic purposes and for rule of law purposes.  And you can say that in a respectful way so you’re not turning people off.  And that’s my basic message is that in order to govern with conservative principles, you have to win.  In order to win, you have to recognize that the country is changing.  We’re getting older.  And we’re getting more diverse in our population.